Among all the technology themes, artificial intelligence (AI) attracted the largest number of investors during 2020, while blockchain and cybersecurity led in terms of investors-to-idea ratio (number of venture capital (VC) investors / number of funded companies) and average deal size, respectively, according to GlobalData, a leading and data analytics company.

Over 2,800 AI start-ups received funding worth approximately US$43bn from more than 3,700 VC investors during 2020, which is the highest among all the technology themes. However, AI lagged behind in terms of average deal size and grabbed the second spot in investors-to-idea ratio. Cybersecurity occupied the top position in terms of average deal size, which stood at US$16.94m for the technology sector during 2020, while it stood at US$15.13m for AI. On the other hand, blockchain registered the highest investors-to-idea ratio of 1.46 in 2020 followed by AI, which reported an investors-to-idea ratio of 1.41.

Aurojyoti Bose, Lead Analyst at GlobalData, comments: “With AI making inroads into virtually all facets of life, businesses across industries have realized its significance and start-ups working in the space are also garnering close attention from VC investors. According to GlobalData’s Thematic Research report, the market for AI platforms is expected to reach US$52bn in 2024.” 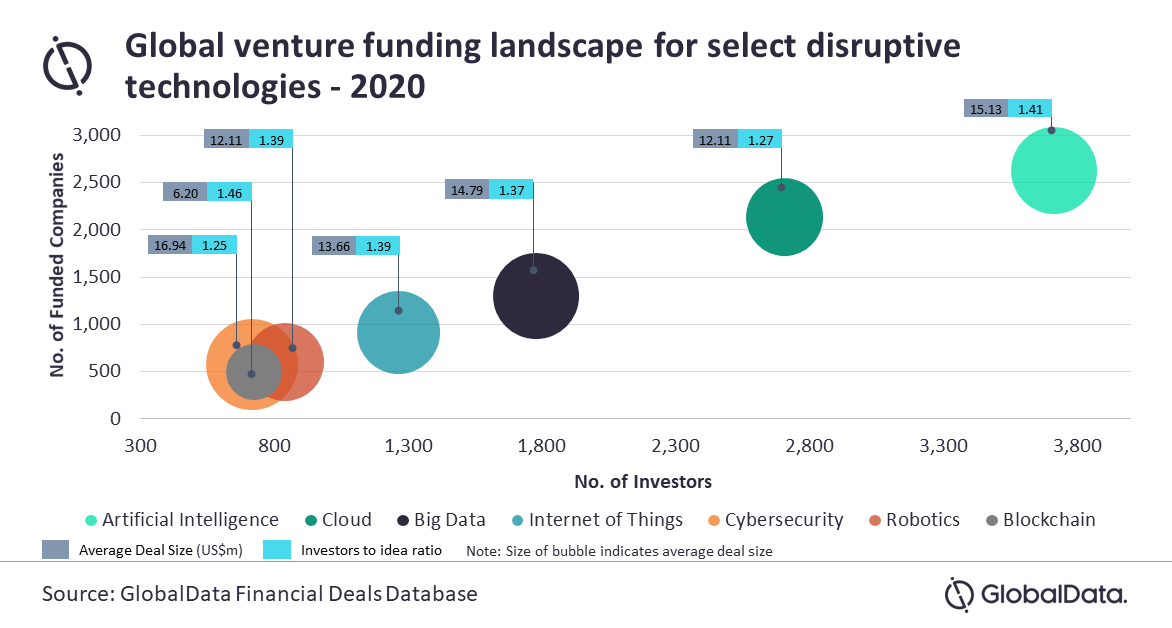 Bose adds: “Cybersecurity’s relevance has increased significantly in the new normal, as the transition to remote working during the COVID-19 pandemic has increased cyber-threats multifold. VC investors are also evincing interest in blockchain initiatives by start-ups with a significant proportion of them active in the fintech space.”

Key funded companies across the key technologies were mostly concentrated in the US or Asia-Pacific regions such as China. Some of the key funded companies of 2020 active in the AI space or focused on the application of AI included the US-based SpaceX and Chinese firm, Manbang Group.

Cybersecurity solution providers, such as Netskope and Sentinel labs, were also among the key companies that were on VC investors’ radar during 2020. Meanwhile, some of the key funded blockchain companies of 2020 included Revolut and Bakkt.