Aging to weigh on economies of all countries in Asia-Pacific by 2025, says GlobalData

29 Jul 2019
Aging to weigh on economies of all countries in Asia-Pacific by 2025, says GlobalData

The consistent supply of a young work force has benefited most cities in the Asia-Pacific (APAC) region over the last few decades. However by 2025, 710 metropolitan areas/cities across APAC will be home to an estimated 226 million elderly people (aged 65 and over), who will account for 11.4% of the total population. This demographic shift to an aging population will weigh on the economy of all countries in the region, however at different times and varying pace, says GlobalData, a leading data and analytics company.

Cities in Japan and South Korea in particular are already facing rapid growth of the aging population. The elderly population in these countries outnumbered the young age population in 2018. The working-age population (15-64 years) in South Korean cities is expected to shrink by 4.7% between 2018 and 2025. The old age dependency ratio (the number of elderly people as a share of those of working age) in cities across Japan is forecast to increase from 47.34% in 2018 to 54.86% in 2025.

In Singapore and Thailand, the elderly population is also expected to outnumber the young age population over the next decade. In China, the combined share of the elderly population in cities has increased from 7.6% in 2000 to 11% in 2018. However, other prominent Asian countries are much younger. The median age in China was 37.7 years or about 10 years older than that in India (28.1) in 2018, according to GlobalData estimates.

Aditi Dutta Chowdhury, Economic Research Analyst at GlobalData, comments: “Cities based in Bangladesh, India, Nepal, Pakistan and Sri Lanka will continue to benefit economically from ‘demographic dividend’, where the growth of the working-age population will outpace that of dependent people in the next decade.”

High incidence of poverty among elderly women in Asian cities

In most countries across APAC, older women outnumbered older men with about 85 men for every 100 women in the age group of 65 years and above in 2018. Hence, the majority of the elderly women are financially dependent on their spouses and children, resulting in the high incidence of poverty and deprivation. This a requires public pension plan for elderly women for financial security in the short run and urgent policy formulation to facilitate an increase in the female labor force participation rate in the long run. 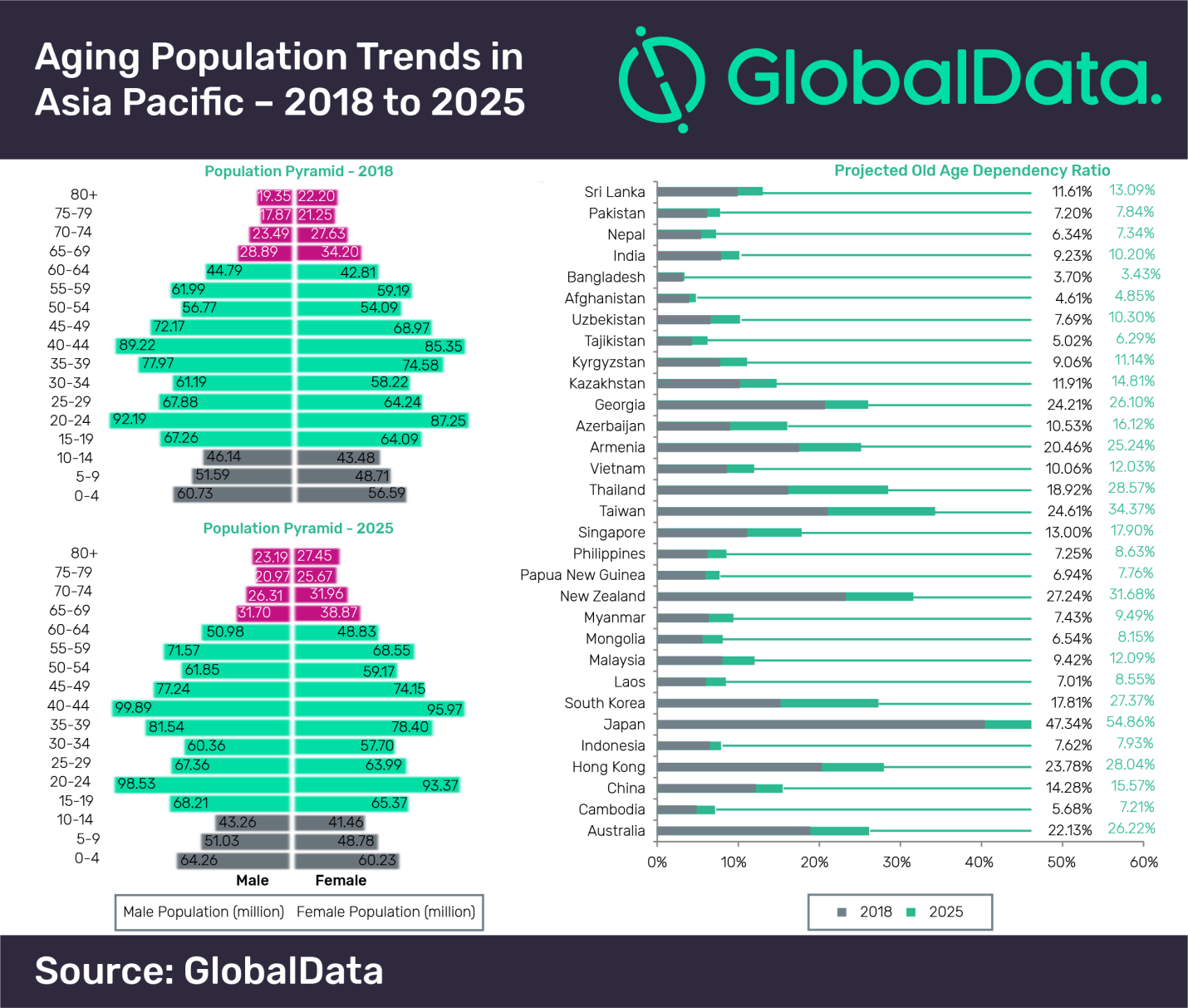 Traditionally, the elderly population in Asia rely on their adult children and other family members for material needs and personal care. However, the breakdown of the joint family system due to demographic, economic and social changes has disrupted this support system, creating the need for an improved public support system.

Chowdhury explains: “With steady growth of the aging population and a falling birth rate, the social burden and financial pressure on the governments’ treasury will be enormous. For instance, the ballooning social security spending in Japan is frequently blamed as one of the main reasons behind the country’s mounting public debt. In an effort to better manage their financial burden, various governments in APAC are raising the retirement age, encouraging re-employment of retired employees and introducing a government-subsidized voluntary direct contribution retirement saving scheme.

“The average median age of South Asian countries, except Sri Lanka, is projected to be less than 30 years in 2020. This provides these economies with an opportunity to act proactively and adapt to an aging society.”