The Americas were second riskiest region in Q2 2020, says GlobalData

The overall risk of the Americas region was recorded at 51.5 out of 100 in Q2 2020, according to the Global Country Risk Index (GCRI) created by GlobalData, a leading data and analytics company. Calculated from the analysis of 52 indicators that affect the levels of risk a country face, the GCRI  shows that global risk has grown since 2019 Q4, in which the Americas region saw a score of 44.4, and was much higher than the global average of 47.9 in Q2 2020.

Kausani Basak, Economic Analyst at GlobalData, comments: “The devastating impact of COVID-19 across both North and South America, including the ensuing economic fallout, has been the highest risk factor. Before the arrival of the virus, the countries of the Americas were battling several issues on various fronts such as border conflicts, economic instability, environmental calamities. The pandemic has further intensified these obstacles, and, as a result, the rise in GCRI was swiftest in the Americas among all regions in Q2 2020 as compared to Q4 2019.”

The already fragile South American countries such as Argentina, Venezuela, Brazil and Chile were devasted by COVID-19-related restrictions. Most countries in the Americas posted a sharp decline in GDP in Q2.

Basak continues: “High unemployment and a poor response from the healthcare system during the pandemic in the countries of Latin and South America have undone years of progress in human development. According to GlobalData, the US, Canada and Chile were the lowest risk nations in the region, whereas Venezuela, Haiti and Nicaragua were the highest risk. Countries with the highest downfall in rank from the previous Q4 2019 update were Mexico, Costa Rica and Argentina, whereas the countries with highest improvement were Honduras, Ecuador and Peru.” 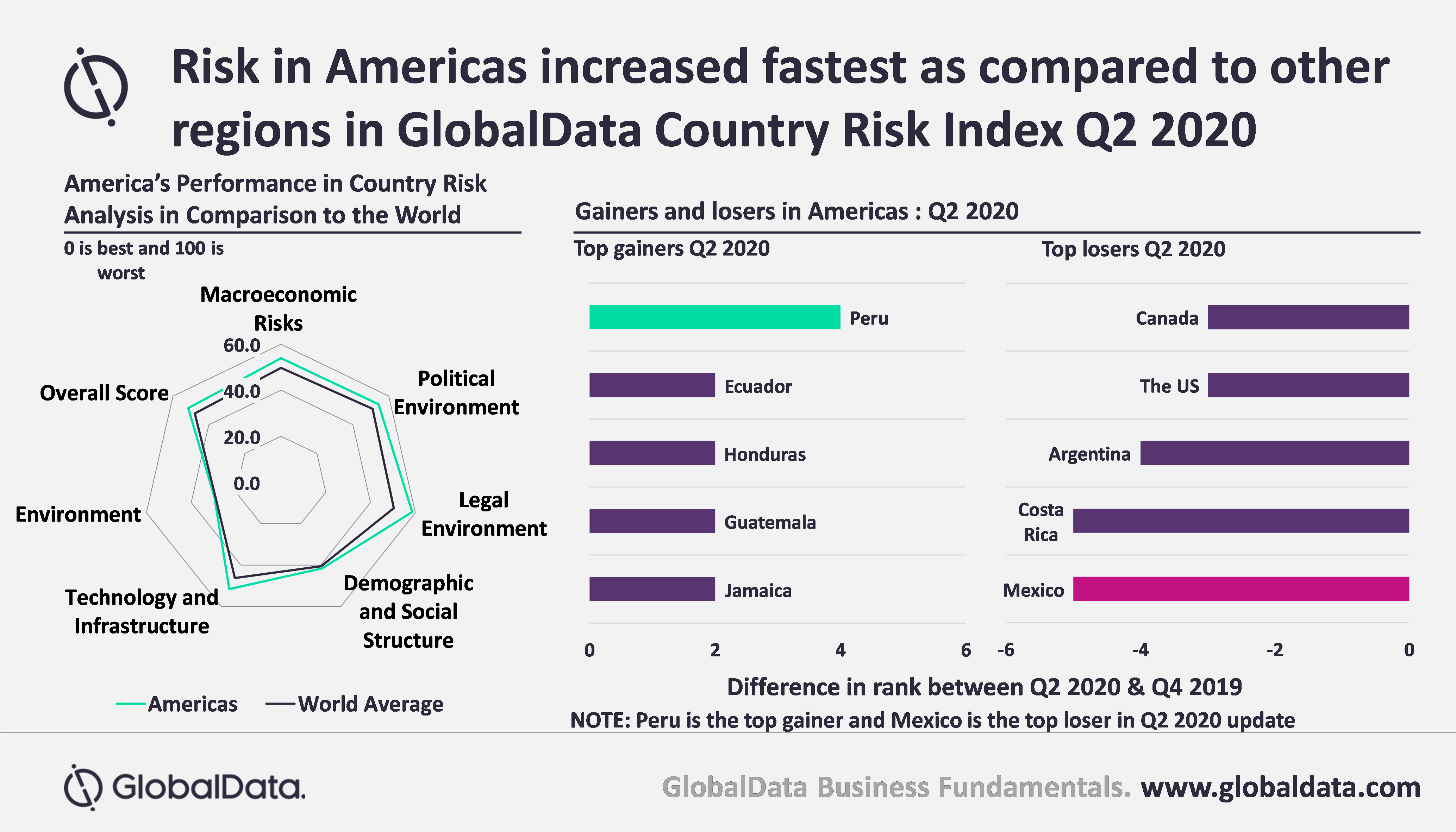 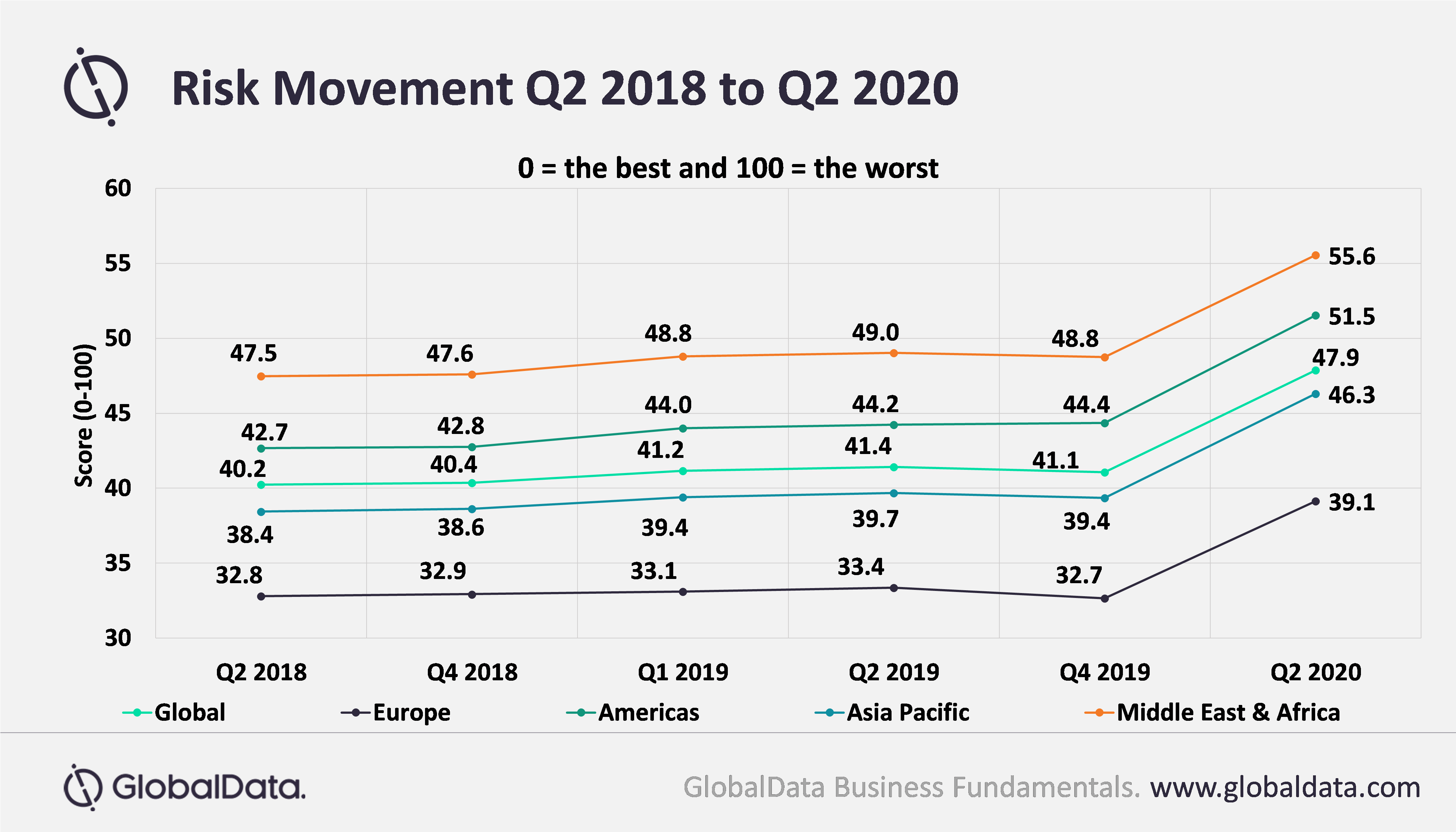 Basak adds: “The US Government has acted proactively and provided ample stimulus to many enterprises facing bankruptcies. However, the country’s strained relation with China is hampering trade and investment flows, casting a dark shadow on the global economy. Meanwhile, Canada’s economy also quickly spiralled downwards in the first half of 2020 and its rank dropped by three places in the GCRI Q2 update. Nevertheless, Canada was also among the best performers in the region in terms of controlling the spread of the virus.”

Sparse government support and rising national debt resulted in Mexico’s GCRI rank to fall by five places in the Q2 2020 update as compared to Q4 2019 – the steepest fall in the region. Argentina’s chronic debt management failures and Brazil’s imprudent pandemic policies has added to their risk score in the Q2 2020 update. Venezuela has been a failed state for years with crashing exchange rate, presidential disputes, and a struggling oil sector. Due to poor state of infrastructure in the country, pandemic monitoring has been poor with very low rates of testing.

Basak adds: “Governments must focus on investing in sustainable infrastructure development while ensuing minimum impact on the ecology. However, increasing polarization in many countries and impetus on protectionist and nationalist policies by key countries is likely to elevate macroeconomic and political risks in the region.”