Apple and Alphabet were the only FAANG companies to see earnings transcript sentiment decline in Q1 2021, according to the Filing Analytics database by leading data and analytics company GlobalData. Both tech giants saw around 2% decline in Q1 2021*, compared to the previous quarter while Facebook, Amazon and Netflix saw 3.8%, 8.4% and 15% sentiment growth, respectively. The drop is expected to be a mere blip for Apple, caused due to an uncertain outlook, but may be more of a concern for Google, which will likely continue to see antitrust and privacy issues.

Rinaldo Pereira, Senior Business Fundamentals Analyst at GlobalData, says: “Apple’s overall sentiment decline was influenced by analysts’ uncertainty over the outlook alongside a short-lived uptick in sales due to the COVID-19 pandemic. However, positivity around themes such as 5G and wearable tech will likely mean a brief sentiment dip for Apple. Notably, MacBook and iPad sales have been in the healthy double digits for the last three quarters and around 50% of these purchases were from newer customers in the last quarter.

“On the other hand, Google’s sentiments were influenced by the management’s comments on Google Cloud’s operating losses in Q4 2020 compared to Q4 2019 and privacy issues, despite healthy revenue growth. ‘Privacy’ discussions in Google’s earnings transcript more than tripled in Q1 2021.

“Governments in the EU and US continue to pose a risk for big tech with data privacy being the highest priority. Facebook and Google are lagging in data privacy** and are likely to face further heat from federal authorities. However, smartphone penetration is expected to grow beyond 90% by 2025*** and is anticipated to fuel double-digit growth rates for digital advertising, which is a bright spot for Facebook and Google in the foreseeable future.” 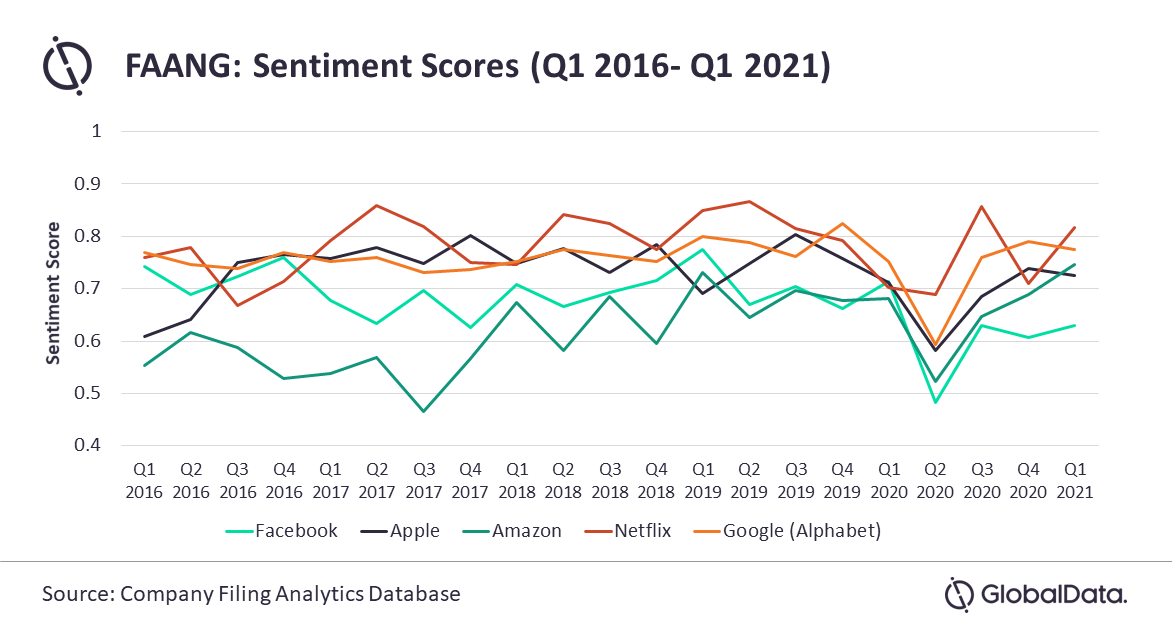 Facebook’s sentiments were driven by the management’s positive sentiment around ad revenues. With its virtual monopoly in social media, Facebook’s data privacy issues have affected analyst sentiments**** in Q1 2021 and moderated the sentiment growth. Mentions of ‘privacy’ and related keywords tripled in Q1 2021 compared to Q4 2020.

Meanwhile, Amazon and Netflix witnessed healthy growth rates for both management and analyst sentiment scores in Q1 2021. Positivity around subscriber growth influenced sentiments for Netflix, with discussions doubling in Q1 2021 compared to the previous quarter. At the same time, Amazon continued to gain from the e-commerce boom. According to GlobalData, the e-commerce market was up by around 40% in 2020 compared to 2019. Growth was driven by COVID-19 trends and the market is expected to reach $2.8 trillion by 2023*****. Discussions around growth nearly tripled in the current quarter and influenced sentiments for Amazon.