Alison Casey, Medical Devices analysts at GlobalData, commented, “Aging populations and increasing disease awareness mean that CRC screening has become a priority for many countries. A greater number of eligible inhabitants (typically individuals aged 50 – 75 years) coupled with the implementation of numerous national screening campaigns, means that this in vitro diagnostics (IVD) market is expected to grow across all regions over the next 10 years.”

GlobalData’s latest report: ‘Colorectal Cancer Screening Tests – In Vitro Diagnostics Market Analysis and Forecast Model’, reveals that, worldwide, over 155m IVD tests for CRC screening are sold each year. This annual figure is expected to reach 182.40m by 2028, growing at a compound annual growth rate (CAGR) of 1.62%. The global market value for IVD tests for CRC screening, currently estimated at $771.25m, is expected to increase even more strongly than test volumes to reach $2bn, a CAGR of 10.0% by 2028.

Casey continued, ‘‘The IVD tests market value is being driven by the release of new more expensive devices, such as fecal DNA testing kits and blood-based assays for CRC screening as well as a switch occurring in many countries in device usage from gFOBT to FIT testing kits.’’ 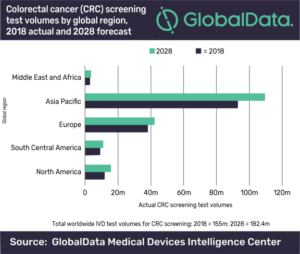 Regionally, North America is predicted to have the highest CAGR for test volumes at 2.58% over the period following the adoption of the Cologuard fecal DNA test kit, and Asia Pacific, the highest increase in actual CRC screening test numbers, with the implementation of large-scale CRC screening initiatives as the target population (individuals aged 50 – 75 years) grows.

Casey added, “Increases in the number of asymptomatic, average-risk individuals being screened are expected to be driven by a number of factors, including aging populations, rising disease awareness, and the implementation of new, national CRC screening programs.

“The majority of CRC screening tests are sold in the Asia Pacific and Europe regions, with colonoscopy still being the predominant method used for CRC screening in North America.”