Asia and the Middle East are set to lead the global styrene-butadiene-rubber (SBR) production capacity as they are poised to see moderate growth over the next five years, potentially increasing from a collective 8.14 million tonnes per annum (mtpa) in 2018 to 8.67mtpa in 2023 and registering a total growth of 7%, says GlobalData, a leading data and analytics company.

The company’s report, ‘Global Styrene-Butadiene-Rubber (SBR) Industry Outlook to 2023 – Capacity and Capital Expenditure Forecasts with Details of All Active and Planned Plants’, reveals that around six planned and announced plants are scheduled to come online over the next five years, which are predominantly located in Asia.

Major capacity addition will be from the Fujian Gulei Petrochemical Company Zhangzhou SBR Plant and Indian Synthetic Rubber Panipat SBR Plant facilities, each with a 0.10mtpa increase by 2023.

Dayanand Kharade, Oil and Gas Analyst at GlobalData, says: “The SBR industry in Asia is expected to grow with increasing demand from the tire segment of the automotive sector.” 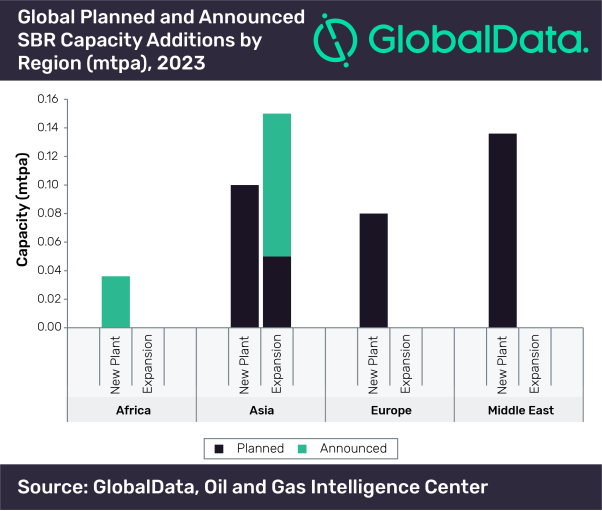 GlobalData identifies the Middle East as the second highest region in terms of capacity addition in the global SBR industry, increasing from 0.13mtpa in 2018 to 0.27mtpa in 2023, at an AAGR of 14.3%. Most SBR capacity additions will be from Iran, with a capacity of around 0.14 mtpa by 2023. The largest capacity contribution will be from the Sadaf Petrochemical Assaluyeh SBR Plant, with a 0.14mtpa increase by 2023.

Kharade concludes: “Sadaf Petrochemical Assaluyeh Co, Eni and Reliance Industries will be the top three companies globally in terms of planned and announced capacity additions over the outlook period.”