Asia, as the major contributor to the growth of the global refinery coking units industry, accounts for around 40% of the refinery coking unit’s capacity additions from new-build and expansion projects, between 2019 and 2023, according to leading data and analytics company GlobalData.

The company’s report: ‘Global Refinery Coking Units Outlook to 2023 – Capacity and Capital Expenditure Outlook with Details of All Operating and Planned Coking Units’ states that up to 1,885 thousand barrels of oil per day (mbd) of coking units capacity will be added globally by 2023 from new-build and expansion projects, taking the total global refinery coking unit capacity to around 11,115 mbd by 2023.

Sumit Chaudhuri, Oil & Gas Analyst at GlobalData, says: “Asia is home to the two fastest growing economies in the world – China and India. These economies are witnessing huge growth in demand for petroleum products, especially transportation fuels such as gasoline and diesel. This surge in demand leading to coking unit capacity additions in Asia.” 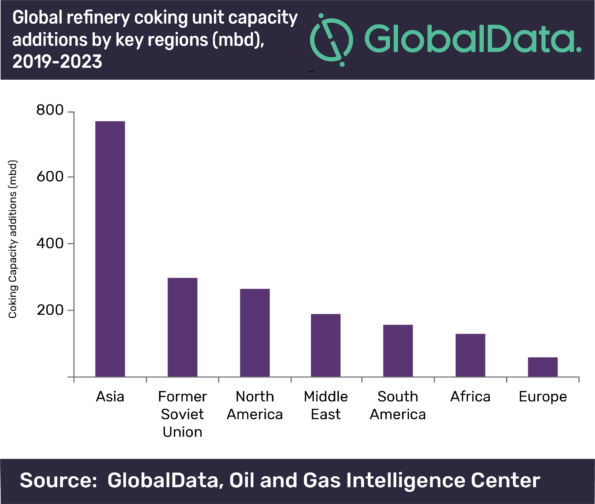 In terms of capacity, Jieyang refinery in China, Pulau Muara Besar in Brunei and Jizan in Saudi Arabia are the top three new-build refinery coking units for the 2019–2023 period, with capacities of 153 mbd, 114 mbd, and 104 mbd respectively.

In terms of capex, Salina Cruz refinery in Mexico, with US$3.6bn, is the top new-build refinery coking unit globally between 2019 and 2023. Salamanca refinery in Mexico follows it with new build capex of around US$2.9bn.