Private equity (PE) and venture financing investors, who endured a volatile year in 2020 due to the ongoing COVID-19 pandemic, seem to be reposing their faith in the Asia-Pacific (APAC) region in 2021. A total of 1,339 deals (mergers and acquisitions, PE and venture financing) were announced in APAC in March 2021, an increase of 14.4% over the 1,170 deals announced in February 2021, reveals to GlobalData, a leading data and analytics company.

Aurojyoti Bose, Lead Analyst at GlobalData, comments: “Deal activity in the Asia-Pacific region has remained inconsistent ever since the COVID-19 pandemic broke. However, 2021 is showcasing some signs of improvement in business sentiments with deal activity registering growth in March also. This could be attributed to improvement in deal activity in most of the key markets.” 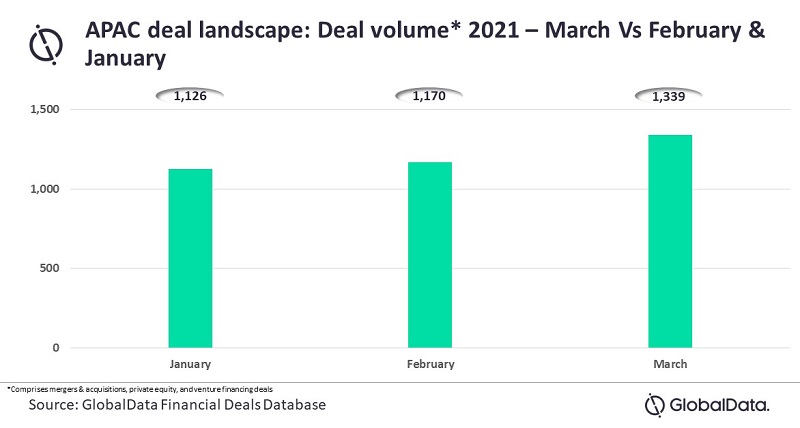 All deal types also witnessed growth in volume during March compared to the previous month. While merger and acquisitions (M&A) deal volume increased by 5.6%, the number of private equity and venture financing deals increased by 23.2% and 22.8%, respectively.

Mr. Bose concludes: “The COVID-19 pandemic and trade dispute between the US and China predominantly weighed on the APAC deal activity last year. However, a possible rebound in economic growth in the region, coupled with the COVID-19 vaccination drive across countries and stable US-China relations under a new US regime are expected to further drive the deal activity in the region in 2021.”