GlobalData’s report, Global Capacity and Capital Expenditure Outlook for Liquids Storage, 2020-2024 – Asia Spearheads Global Liquids Storage Capacity Growth, reveals that Asia is likely to witness a total liquids storage capacity additions of 321 million barrels (mmbbl) by 2024. Of this, the capacity of planned projects that have received the necessary approvals for development accounts for nearly 150 mmbbl.

Haseeb Ahmed, Oil and Gas Analyst at GlobalData comments: “Asia is expected to witness the start of operations of 67 new-build liquids storage terminals by 2024. Of these, 39 are planned and the remaining 28 are early-stage announced projects. China’s Zhanjiang IV and Indonesia’s Selayar are the largest upcoming liquids’ storage terminals in the region, with capacity of 44 mmbbl each by 2024.” 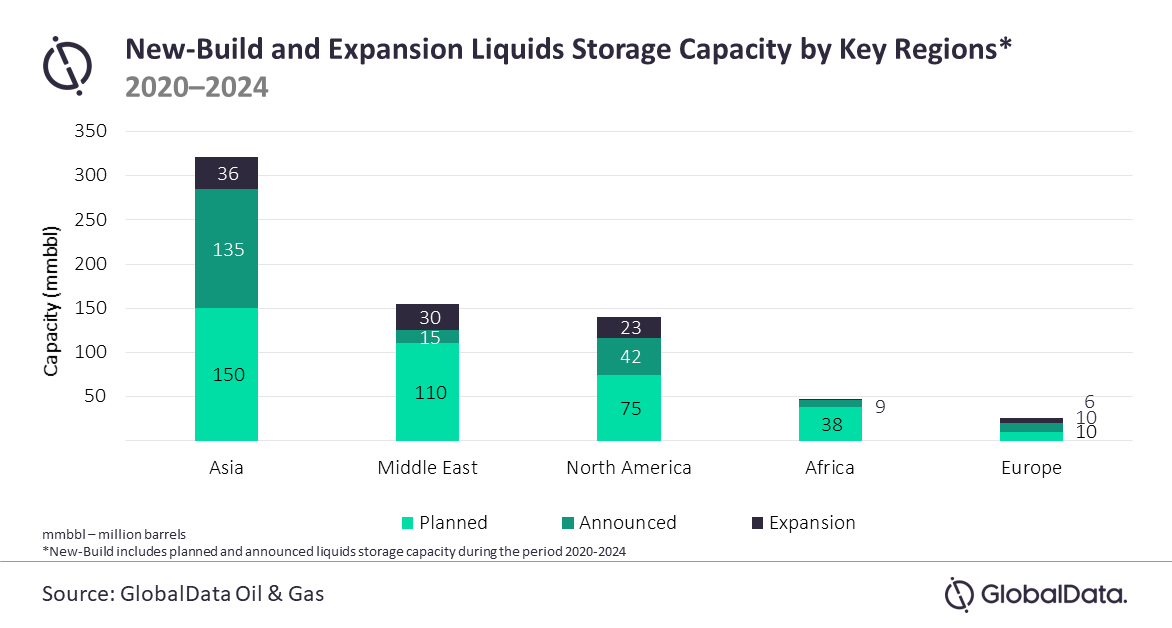 GlobalData identifies the Middle East as the second-highest contributor to the global liquids storage capacity additions contributing around 22% or 155 mmbbl by 2024. The region is expected to witness the start of 16 planned projects and four announced projects. Fujairah XVIII in the United Arab Emirates is the largest upcoming liquids storage terminal in the region with a capacity of 42 mmbbl by 2024. Ras Markaz Crude Oil Park in Oman and Jask in Iran follow with respective capacities of 25 mmbbl and 10 mmbbl.

North America ranks third globally contributing about 20% of the world’s liquids storage capacity additions during the outlook period 2020–2024. The region has 50 upcoming projects, of which 32 are planned projects and the rest 18 are announced projects. Plaquemines is the largest upcoming liquids storage site in the region with a capacity of 20 mmbbl by 2024.