Asia will drive the global economy in 2019, according to an analysis of 40 major economies based on inflation and GDP growth forecasts by GlobalData, a leading data and analytics company.

The company’s analysis categorizes each country by ‘Low’, ‘Moderate’ and ‘High’ GDP growth rate together with ‘High Inflationary Economies’ during the period 2014-2018 (annual average). 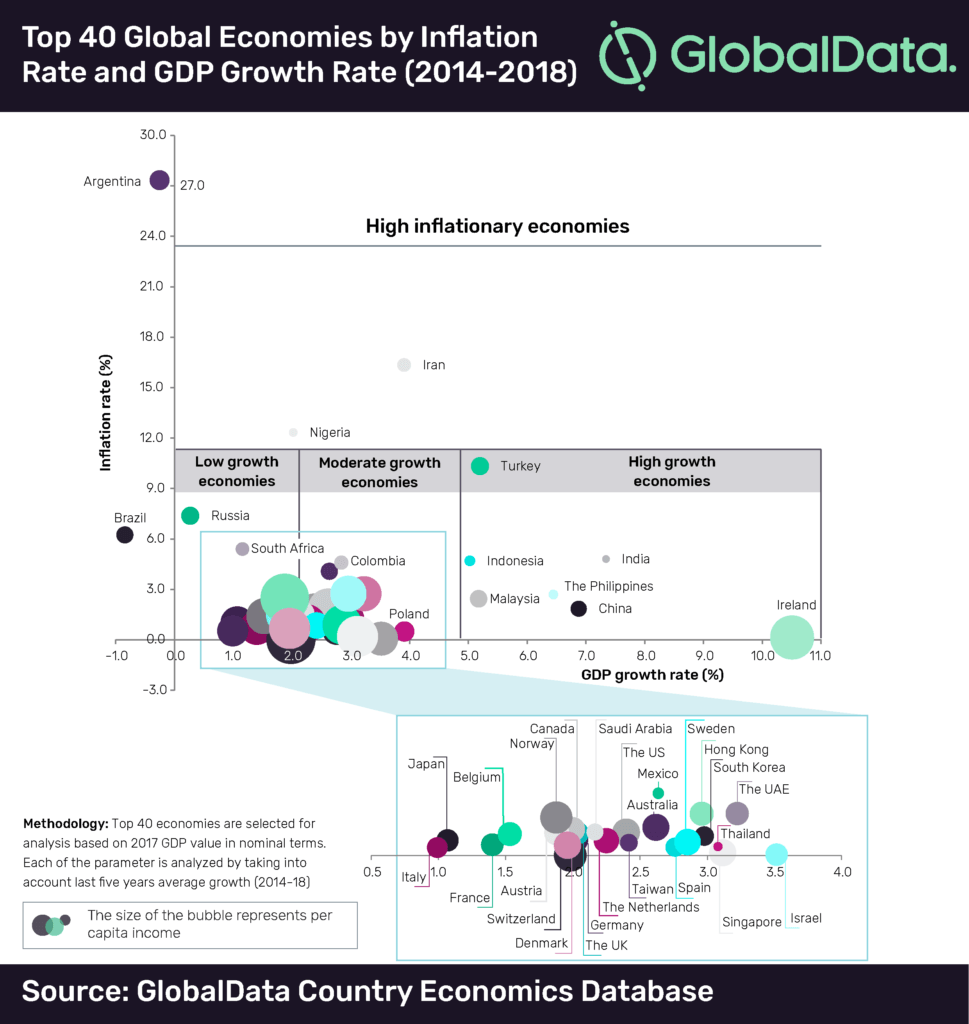 Principally located in Asia and accounting for more than half of the world’s GDP growth in 2019, high growth economies include Indonesia, India, Malaysia, The Philippines, China, Turkey and Ireland.

Amid the ongoing trade war with the US, which is likely to have a significant impact on the Chinese economy, the government has initiated a number of steps for sustaining the buoyancy of the economy. The National Development and Reform Commission (NDRC) has relaxed its restriction on large scale investments by local government in May 2018 and in October 2018, the People’s Bank of China increased the refinancing and rediscounting quota by CNY150bn (US$21.96bn) to support small and micro enterprises.

Although the Indian economy is anticipated to grow at a marginally slower pace in 2019, it is still expected to be one of the fastest growing economies in the world. A number of risks emanate for the Indian economy in the form of rising political uncertainty, weakening currency, adverse terms of trade and a slowdown in major trading partners economy. Meanwhile, structural reforms and higher investments are expected to drive the economic activity over the medium term.

Ireland is expected to continue to grow at a robust pace in 2019 due to solid growth in employment, strong domestic demand and higher investment in the construction sector.

European, North American and Middle Eastern economies will broadly experience only moderate economic growth in 2019. The rise in household consumption and expenditure, increased wages along with strong business sentiment underpinned by reduction in corporate tax rate will continue to drive economic growth in the US. GlobalData, however, forecasts the growth rate to slow down marginally from 2.9% in 2018 to 2.7% in 2019 due to the fading of the fiscal stimulus and tighter financial conditions.

Lower industrial production due to the introduction of new emission standards, subdued foreign demand and weak private consumption expenditure is expected to keep the German economic growth rate modest in 2019. Highly uncertain outcomes of the Brexit deal is expected to keep the economic growth rate of the UK below the last five years (2014-2018) average over the next year.

Asian economies such as Singapore, Hong Kong and South Korea, which are sensitive to fluctuations in global trade, are expected to slow down on the subdued trade outlook for 2019 on the back of protectionist policies of major economies.

Economic growth rate in Japan is estimated to remain unchanged in 2019 over 2018; however, it is anticipated to be below the last two years (2017-2018) average of 1.6% on the planned consumption tax hike from October 2019 and persistent natural disasters. In 2018, the country recorded 3,451 mudslides induced by rains and earthquakes.

Owing to the fall in global commodity prices, the Russian and Brazilian economies declined in 2015 and 2016. However, following a recovery of commodity prices from 2017 onwards, they posted a marginal growth rate in 2018. The Italian economy has underperformed in recent years, posting an average growth rate of around 1% for the period 2014-2018 and this rate is expected to stay at around the same level in 2019.

The Iranian economy was in recession with a very high level of inflation in 2018 following the sanctions imposed by the US. The situation is expected to deteriorate further in 2019. Similarly, Argentina and Nigeria have faced high inflation over the last five years, holding back their GDP performance significantly.