Australia will account for all floating production, storage and offloading vessels (FPSOs) planned for deployment in Oceania during 2019–2025, according to GlobalData, a leading data and analytics company.

The company’s report: ‘Q1 2019 Global FPSO Industry Outlook – Australia Leads FPSO Deployments in Asia-Pacific’ reveals that, globally, 67 planned and announced FPSOs are expected to start operations between 2019 and 2025. Of these, 26 are planned and 41 are announced.

In Oceania, all the five upcoming FPSOs–Barossa, Browse 1, Browse 2, Buffalo (Re-Development), and Crux–are announced FPSOs. Woodside Browse Ltd. leads among operators with two upcoming FPSOs, which are expected to commence operations during the outlook period. The rest of the operators–Shell Development (Australia) Pty Ltd, Carnarvon Petroleum Ltd and ConocoPhillips–will operate one FPSO each during the period. 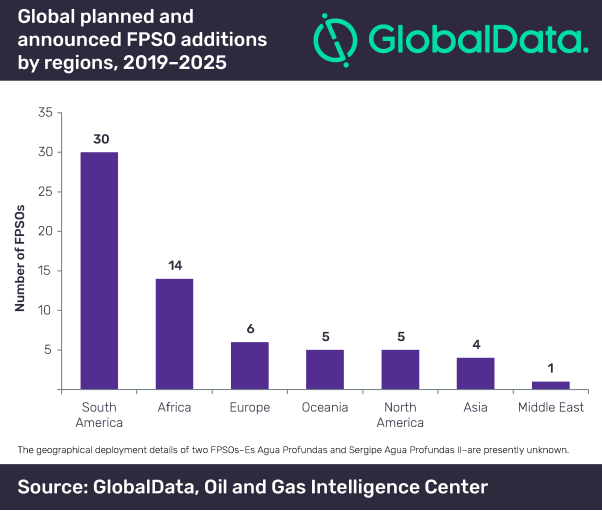 IMAGE FOR PUBLICATION – Please click this link for the chart: ‘Global planned and announced FPSO additions by regions, 2019–2025’

Europe is the third highest among the regions in terms of planned and announced FPSO additions. The region has a total of six upcoming FPSOs during the outlook period. Of these, two are planned and four are announced FPSOs, respectively. Norway and the UK are the key countries within the region with three upcoming FPSOs each, which are expected to commence operations by 2025.

Tejomoortula concludes: “Mexico leads North America with proposed deployment of three FPSOs, while India leads Asia with two FPSOs. In the Middle East, Israel is the only country with a planned FPSO, Karish, which is expected to commence operations in 2021.”