ByteDance, the parent company of TikTok, has been at the center of fierce debate on rising speculation to ban TikTok in the US due to potential national security issues. India has already banned this short-video app citing data security threats. Against this back drop, a sharp rise in conversations around ByteDance is being noticed among the influencers on Twitter, which surged near 200% during June-August 2020 compared to the previous three months, reveals GlobalData, a leading data and analytics company.

Prashant Saxena, Influencer Expert at GlobalData, comments: “A significant conversation spike was observed in July, following India’s decision to ban 59 Chinese apps including TikTok in June end, after a clash between the two nations at Galwan Valley. Rising threat of national security and defense was the major reason cited for banning the Chinese apps in India.” 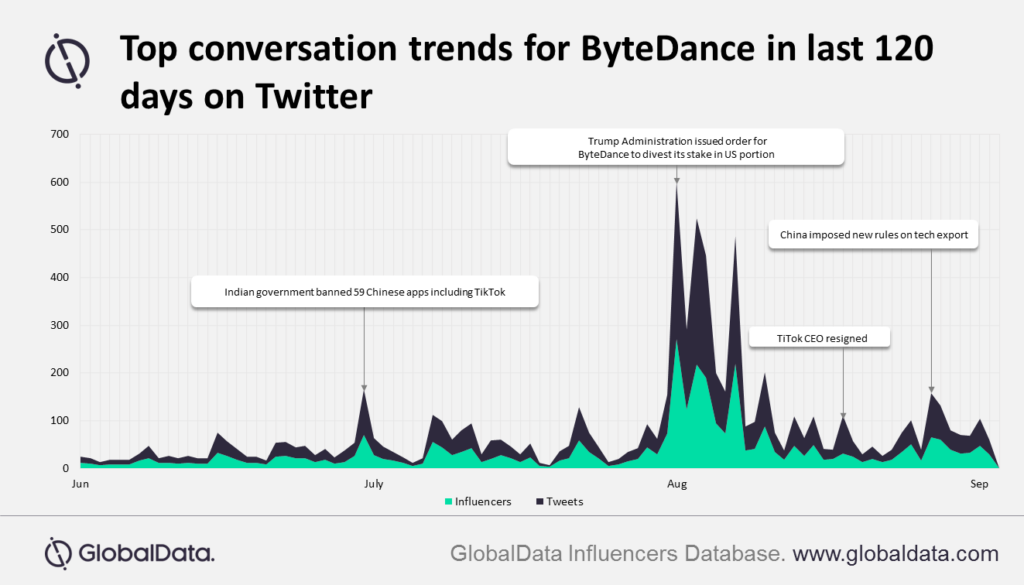 Similarly, the US issued an executive order to ByteDance, stating that the app ‘TikTok’ will be taken down if it fails to sell its US operation to any American company by 15 September 2020; later, the deadline was extended till 12 November 2020.

The CEO of TikTok US, Kevin Mayer, who was just months into the job, resigned after the company grappled with force sale. With companies such as Microsoft, Walmart and Oracle emerging as potential buyers, August also started with significant number of conversations over new American owner for this most downloaded Chinese app. There were reports that the deal could be in the range of US$20-30bn.

Mr Saxena concludes: “However, it may not be a smooth path with China’s new export control rules likely to complicate the deal and it would be interesting to see how serious is the US Government on banning the app and if TikTok’s US operations will get acquired by any American company or not.”