Artificial intelligence (AI) has emerged as a true foundational technology that can enhance competitiveness, boost productivity and safeguard national security. With so much at stake—the two global superpowers—the US and China are framing policies to promote AI development to gain a strategic advantage over each other. While the US still leads the AI race, China is not far behind and appears to be quickly minimizing the gap, reveals GlobalData, a leading and data analytics company.

An analysis of GlobalData’s Financial Deals Database reveals that three of the top five venture capital (VC) funded companies in the AI space in 2020 were headquartered in the US while the other two were from China.

The US-based Space Exploration Technologies Corp. (SpaceX) raised US$2.5bn, the highest VC funding among all the companies in AI space last year. Robinhood Financial, which leverages AI to identify best stocks, and autonomous vehicle technology company Pony.ai were the other two American companies to make it to the top five list and raised US$1.3bn and US$729m, respectively.

SpaceX was closely followed by China-based online education startup Zuoyebang, which raised US$2.4bn. Mobile truck-hailing unicorn Manbang Group, which raised US$1.7bn is the other Chinese company to feature among the top five.

Aurojyoti Bose, Lead Analyst at GlobalData, comments: “The US has long been considered an AI leader. However, in July 2017, China’s State Council released the country’s ambitious strategy, ‘New Generation Artificial Intelligence Development Plan’, to emerge as the world leader in AI by 2030. As a result, the two countries are now in a race to take the lead in research and application of AI. Subsequently, we are seeing increasing number of companies from both the countries making significant progress in the application of AI and VC investors are also taking a note of it.” 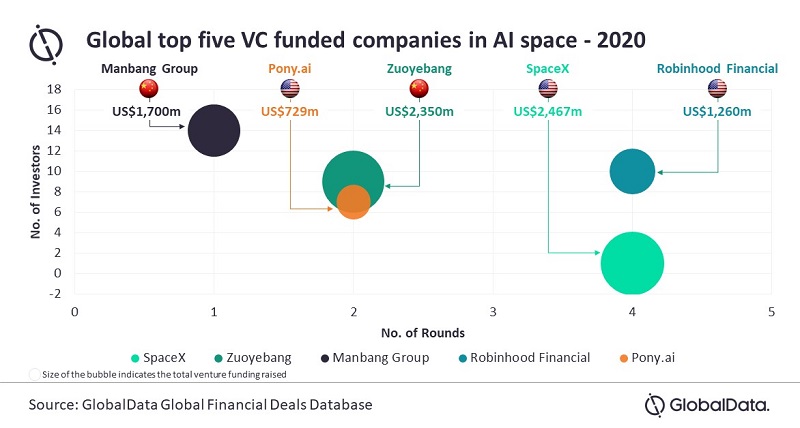 Amid the COVID-19 pandemic, China successfully used its AI and big data tools to trace contacts, enforce social distancing and contain the virus. Against this backdrop, the negative economic impact of the COVID-19 notwithstanding, GlobalData forecasts global market for AI platforms to grow from US$29bn in 2019 to US$52bn in 2024.

Mr. Bose concludes: “The geopolitical rivalry between the US and China is extending to emerging technologies, including AI. The competition is expected to be more intense in the coming years with both the countries extending further financial as well as regulatory support to their respective AI companies and imposing stringent laws to restrict the entry of the other’s investment in related businesses.

“However, China is looking to reduce reliance on foreign technologies by encouraging domestic startups. In addition, by announcing a more conducive regulatory framework to attract talents and emerge as an AI leader by 2030, China has a better chance to gain upper hand over the US.”