China recorded the highest year-on-year increase in the number of clinical trials initiated investigating PD-1/PD-L1 targeted combination immuno-oncology therapies across the eight major markets (8MM*) in 2020, according to GlobalData, a leading data and analytics company.

In 2020, the US emerged as the leading market in industry-sponsored initiated clinical trials for PD-1/PD-L1 targeted combination therapies with 249 new trials, followed by China with 135 trials while the highest number of initiated trials in a single European market was 75. 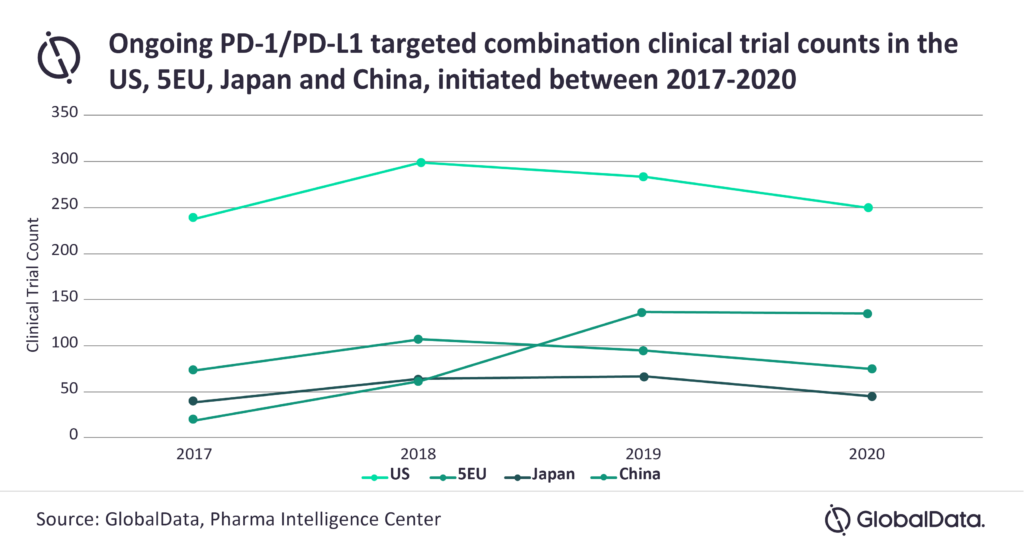 Ufuk Ezer, Hematology and Oncology Analyst at GlobalData, comments: “Considering the annual numbers from 2017 to date, this represents a more than seven-fold increase for China, whereas in the US the number of initiated trials in 2020 was only slightly higher than 2017. This could be attributed to the emerging domestic PD-1/PD-L1 inhibitor market, as well as the overall transformation in the country’s industry regulations and policies, driving research and development in oncology.”

In the major European countries, the rates of increase in PD-1/PD-L1 targeted trials initiated each year during the same period were mostly in line with the rates in the US, whereas in Japan the yearly changes were less significant when benchmarked with the US.

Ezer continues: “Clinical development for PD-1/PD-L1 combinations in the major markets of Europe has grown at a comparable rate to the US in 2017-2020. Although, given the significantly lower trial numbers, there is lesser novelty in partnering drug mechanisms and diversity in clinical trial programs when compared with the US.”

Between 2017 and 2019, the number of clinical trials initiated for PD-1/PD-L1 targeted combination therapies increased substantially, which continued in 2020, albeit with a significantly slower rate possibly due to the global COVID-19 pandemic. Considering all initiated clinical trials featuring PD-1/PD-L1 targeting drugs in 2017-2020, combination trials accounted for more than 84%. This shows a growing interest in combinations rather than monotherapies of this class of checkpoint inhibitors.

Ezer concludes: “The industry seems to be moving away from trials for PD-1/PD-L1 monotherapies and experimenting with new immunotherapies and targeted therapies concurrently with these drugs. Biomarker-led combination therapies, and new treatment modalities such as dual checkpoint targeting or more sophisticated immunotherapy combinations are on the horizon in cancer care.”

*8MM: The US, France, Germany, Italy, Spain, the UK, Japan and China