China is expected to drive capacity growth of 34% in Asia and Oceania’s refinery crude distillation units (CDUs) from planned and announced (new-build) projects between 2019 and 2023, according to GlobalData, a leading data and analytics company.

The company’s report, ‘Refining Industry Outlook in Asia and Oceania to 2023 – Capacity and Capital Expenditure Outlook with Details of All Operating and Planned Refineries’, reveals that China is expected to have new-build CDU capacity of 2,021 thousand barrels of oil per day (mbd) by 2023. 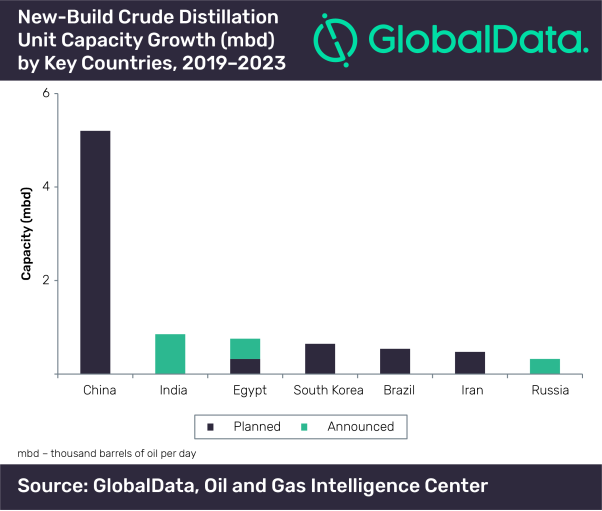 Following China, GlobalData identifies Pakistan as the second highest country in terms of CDU capacity growth in Asia and Oceania, adding a new-build CDU capacity of 875 mbd by 2023. Of the total capacity, 120 mbd will come from planned CDUs and 755 mbd is expected to come from early-stage announced CDUs. Lahore refinery is expected to have the highest capacity among all the planned and announced CDUs in the country with a total of 300 mbd by 2023.

Ette concludes: “Malaysia is the third highest country in terms of CDU capacity additions in Asia and Oceania with 700 mbd of CDU capacity from planned and announced projects by 2023. The Sipitang refinery is expected to have the highest CDU capacity of 300 mbd by 2023 in the country.”