Territorial disputes over the South China Sea and historical conflicts with India have influenced China’s decision to build a modern and battle-ready People’s Liberation Army (PLA), both in procurement and future aspirations. Against this backdrop, the country’s defense acquisition expenditure is expected to grow exponentially and record a strong compound annual growth rate (CAGR) of 5.75% between 2021-26 to reach US$109.2bn in 2026, forecasts GlobalData, a leading data and analytics company.

GlobalData’s report, ‘China Defense Market – Attractiveness, Competitive Landscape and Forecasts to 2026’, reveals that China did not cut back on its defense expenditure despite the economic impact triggered by COVID-19. The total defense expenditure will continue to grow at a robust CAGR of 5.45% to reach US$275.4bn in 2026. 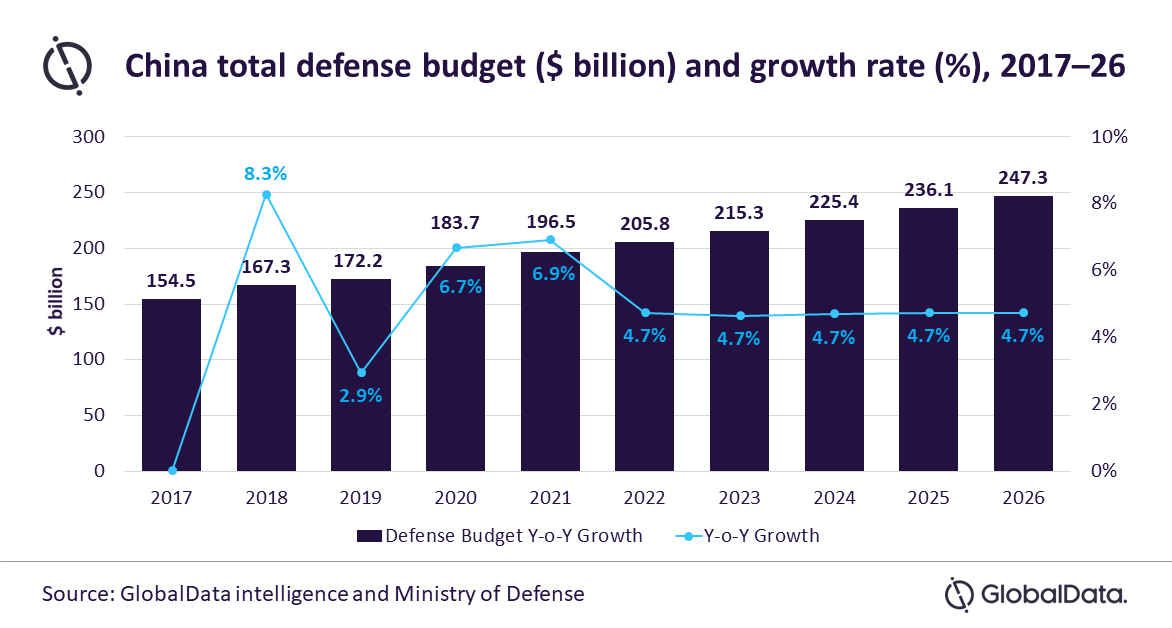 Akash Pratim Debbarma, Aerospace & Defense Analyst at GlobalData, comments: “China’s aim to build the strongest army and a battle-ready PLA to counter any future aggressions have driven the defense budget over the historic period. Even when the economy of the whole world suffered severely due to the adverse effect of the COVID-19 pandemic, China’s GDP has seen an increasing trend, which in turn allowed it to maintain the relatively increasing growth rate in defense budget.”

According to GlobalData, China is expanding its arsenal of ballistic missiles along with the continued mass production of relatively modern defense platforms, which includes procurement of two of its indigenously built aircraft carriers (003 and 004), and six Tang-Class (Type 096) next-generation nuclear submarines; J-20 Black Eagle, J-18 red eagle, and FC-31 multirole aircraft.

Debbarma concludes: “Driven by its aim to routinely venture into the Indian Ocean or patrol the open Pacific, China’s aircraft carriers (003 and 004) and Tang-Class (Type 096) next-generation nuclear submarines are expected to strengthen its operations in its waters and secure its strategic interests further.

“Faced with hostile neighbors on its borders, China has been compelled to maintain a strong defense posture. The procurement of the modern platforms and expansion of ballistic missile and nuclear weapons will effectively strengthen PLA to counter any future aggressions and commit to its vision for the ‘great rejuvenation of the Chinese nation’.”