The Chinese wealth market remains resilient and continues to grow despite the impact of COVID-19, driving the Chinese mainland affluent population growth. This population, including the mass affluent investors (holding liquid assets of US$50,000–$1m) and High-net-worth (HNW) individuals (holding liquid assets of more than US$1m), is expected to grow by 9.0% to reach 58.2 million in 2021 end, says GlobalData, a leading data and analytics company.

According to GlobalData’s Wealth Market Analytics, the number of affluent individuals recorded an average annual growth rate (AAGR) of 9.3% between 2016 and 2020 rising from 36.6 million in 2016 to 53.5 million in 2020. The country is home to the largest affluent population in Asia and the second largest globally, behind only the US.

As ground zero of the COVID-19 pandemic, China was always going to suffer some ill effects in its own retail savings and investments markets in 2020. The exceptionally strong growth in financial assets enjoyed by the affluents in China in recent years did see a slight dip in early 2020 as its early pandemic control orders bit into economic activity, while its trade dispute with the US caused additional disruption.

Ravi Sharma, Lead Banking and Payments Analyst comments: “While China was affected by COVID-19 initially, the country was among the few countries, which have been able to suppress the virus to a large extent. With negligible infections, a relatively early restart of domestic economic activity, stimulus deployed by the government coupled with increased manufacturing sector for export, China was able to a sustain a marked rebound in its overall saving and investments market in the second half of 2020.”

This supported some of the most robust growth in affluent population seen anywhere in the world in 2020. 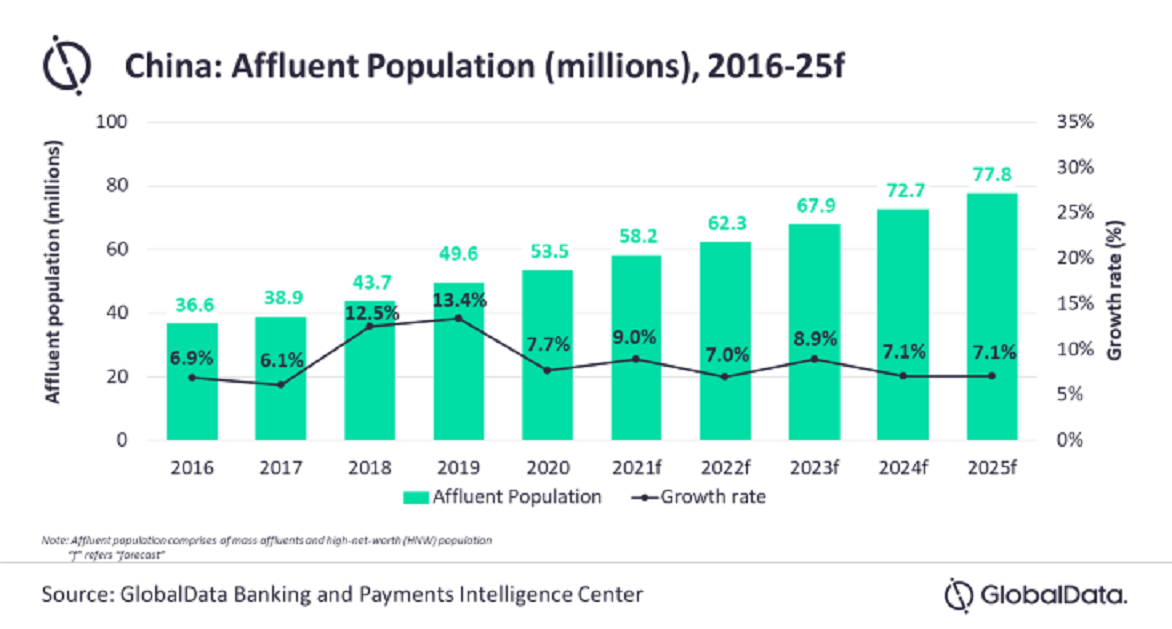 China’s wealth resilience was aided by its heavy bias towards deposits in its retail investment markets, a common enough feature of developing markets and one that shielded many from the loss of wealth suffered by equity investors elsewhere.

However, GlobalData anticipates a slight shift away from deposits among the Chinese investors, towards equities and mutual funds once the pandemic subsides completely.  The Shanghai Stock Exchange Composite Index recovered from the losses incurred earlier in the year, with stock market index registering 13.9% growth in 2020, fuelling an appetite for riskier assets among mainland investors. This will support the rosy forecast GlobalData has pencilled for China in 2021.

Mr Sharma concludes: “2021 is expected to be a strong year for the investors including the affluent Chinese. Even though China began its recovery earlier than the rest of the world, its economy and financial markets will continue to expand, supported by its recent modest financial liberalization which increases foreign access to its capital markets.”