Colombia renewable capacity to reach 5.9GW but coal-based power still on the rise with a 43% increase by 2030, says GlobalData

05 Sep 2019
Colombia renewable capacity to reach 5.9GW but coal-based power still on the rise with a 43% increase by 2030, says GlobalData

Installed capacity of renewable power in Colombia is expected to rise from 2% in 2018 to 14% in 2025, with a further rise to 21% by 2030. Renewable capacity in the country is slated to increase fivefold to reach 5.9 gigawatts (GW) at a compound annual growth rate (CAGR) of 24.4%. This projected growth can be attributed to new government policies facilitating funds for renewable energy projects, energy efficiency measures and announcement of renewable energy auctions in 2018, says GlobalData, a leading data and analytics company.

However, GlobalData’s latest report, “Colombia Power Market Outlook to 2030, Update 2019 – Market Trends, Regulations and Competitive Landscape, also reveals that the country’s coal-based capacity will increase by 43% between 2018 and 2030 to reach 2.4GW while gas-based power will contribute 14% of total capacity.

Renewable energy and energy efficiency projects will handle the demand side management in the near future. The country’s onshore wind capacity is expected to increase from 19.5 megawatt (MW) in 2018 to 3.4GW in 2030, representing the country’s largest growth among its renewable sources. Solar photovoltaic (PV) capacity is expected to reach 1.7GW in 2030 from 172.6MW in 2019 at 23% CAGR, while the biopower segment will see growth of 7% CAGR to reach 719MW. To date, Colombia does not have any installed geothermal capacity but it is expected to have 50MW installed by 2024, leading to 115MW capacity in 2030 growing at 15% CAGR.” 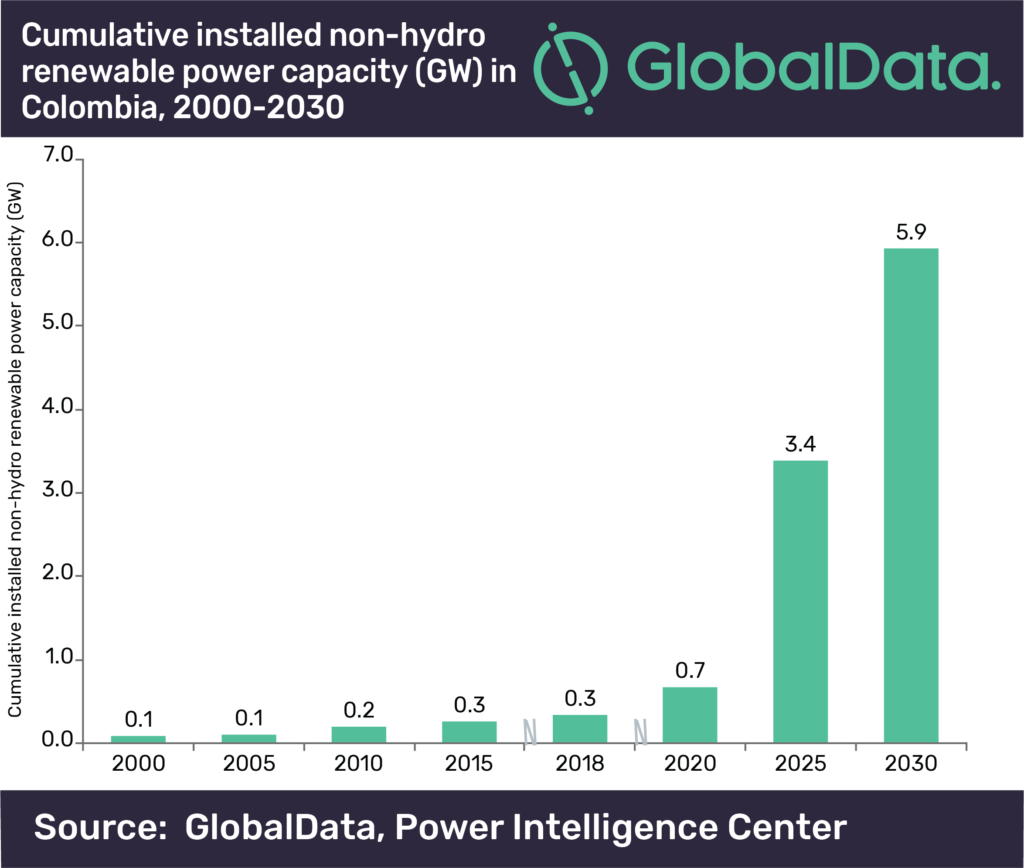 Colombia’s Generation and Transmission Expansion Plan 2015-2029 is expected to accommodate high volumes of renewable energy in the near future. The anticipated grid expansion and modernization of 4.2GW to 6.7GW, which is aimed to support 1GW coal and 1.5 GW hydro, will involve huge investment in grid infrastructure industry. This, in turn, is likely to open up new markets for energy storage and energy efficiency systems to enable steady supply of power when adequate renewable energy is unavailable.

Sil concludes: “Colombia’s overdependence in hydropower is a big challenge, with growing power consumption and declining power exports during drought years, which are now occurring frequently. As a result thermal power, especially gas-based power, will play a significant role in Colombia’s power generation mix and cater to the country’s base-load power to 2030.”