Demand for drivers* has surged in the last year, with job advertisements for these positions more than doubling from 16,417 in August 2020 to 34,515 in August 2021, according to the jobs analytics database by GlobalData. The leading data and analytics company notes that simply advertising for drivers is not enough and incentives such as sign-on bonuses and high wages are needed to fill positions. A high number of retirements in recent times and tough working conditions have prompted companies to go the extra mile.

Ajay Thalluri, Business Fundamentals Analyst at GlobalData, says: “Drivers are in demand now more than ever. Simply advertising for a driver is not enough, and many companies have decided to tackle the shortage by providing sign-on bonuses of up to $15,000, as well as paying salaries of up to $144,000 annually.” 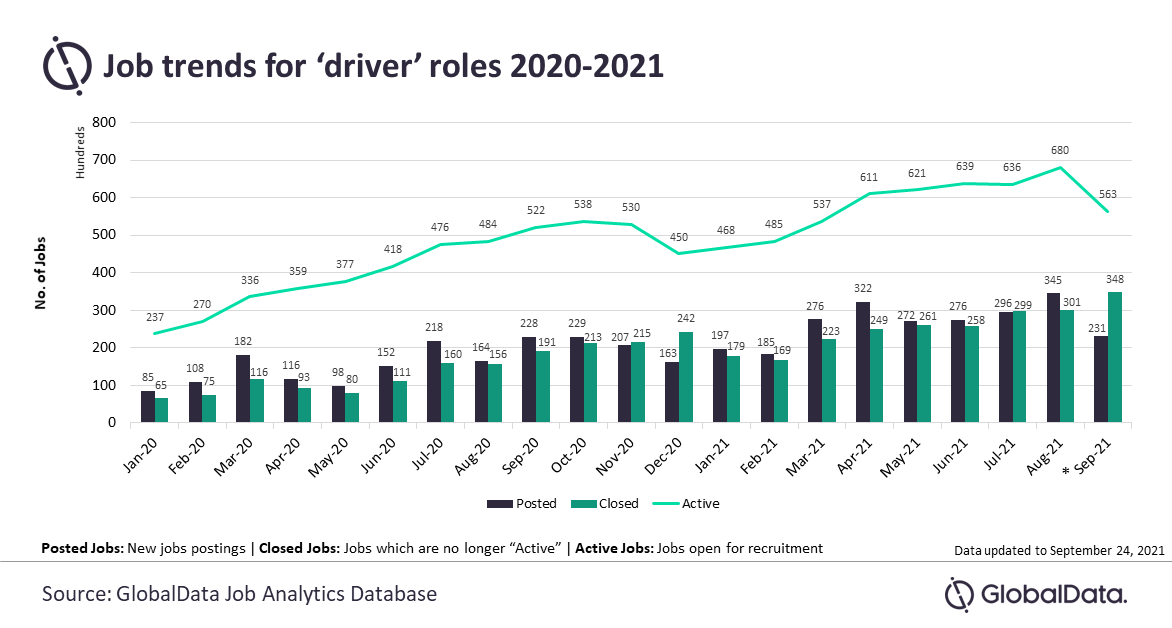 Looking at the recently advertised jobs, Thalluri highlights some of the most noteworthy examples of various incentives:

Thalluri continues: “While lucrative benefits have become common to attract drivers, companies are also reviewing their hiring strategies. For example, Challenger Motor Freight listed a role for ‘Director of Driver Recruiting’ in August 2021 to implement innovative recruitment and retention strategies.

“Similarly, XPO Logistics is developing plans to build truck and driver capacity, as well as a recruitment program to meet driver growth targets. Meanwhile, Anderson Trucking Service listed a role for a ‘Vice President of Driver Recruiting’ to research and explore emerging technology and legislation that may impact or expand the company’s ability to recruit drivers.”

DoorDash, which relies on gig workers, is hiring to expand in new geographies. Its listing for ‘Director, Driver Conversion and International Operations’ role will boost drivers and hit lofty fleet growth targets in Australia, Canada, Japan, and future launch markets.

Thalluri concludes: “The hiring trend for drivers is expected to be strong in Q4 2021 driven by companies increasing their focus on direct-to-consumer (DTC) product and service delivery strategies and holiday shopping.”