Consumer discretionary stocks led the S&P 500 charge between 31 January 2020 and 31 January 2021, while energy stocks remained the worst performing sector, according to analysis by GlobalData, a leading data and analytics company.

Aggregate market cap of S&P 500 index constituents grew 18% from $28.4 trillion to $33.5 trillion over the period, and the index posted an annual return of 15.2% – whereas the return was significantly up by 66% from its lowest level on 23 March 2020. The top ten stocks (Apple, Microsoft, Amazon, Alphabet, Tesla, Facebook, Berkshire Hathaway, J&J, Visa and Walmart) accounted for 30.1% of S&P 500’s aggregate market cap.

The sectors that drove index performance were consumer discretionary with aggregate market cap growth of 56%, followed by information technology (35.1%), materials (21.3%), and communication services (20.9%), whereas energy remained the worst performing sector.

Information technology market cap grew to $9,044bn over the previous year. There were 50 tech companies out of 75 that reported growth, with as many as 19 growing over 50%. The sector continued to witness some big mergers and acquisitions (M&A) deals such as Nvidia’s acquisition of Arm, AMD’s acquisition of Xilinx and Salesforce’s acquisition of Slack.

Parth Vala, Company Profiles Analyst at GlobalData, comments: “Tech stocks are the new gold and are being considered as safe bets. The world has become more technology dependent in these unprecedented times, which is likely to continue as businesses across the globe invest heavily in technologies that would not only help them survive but also thrive.” 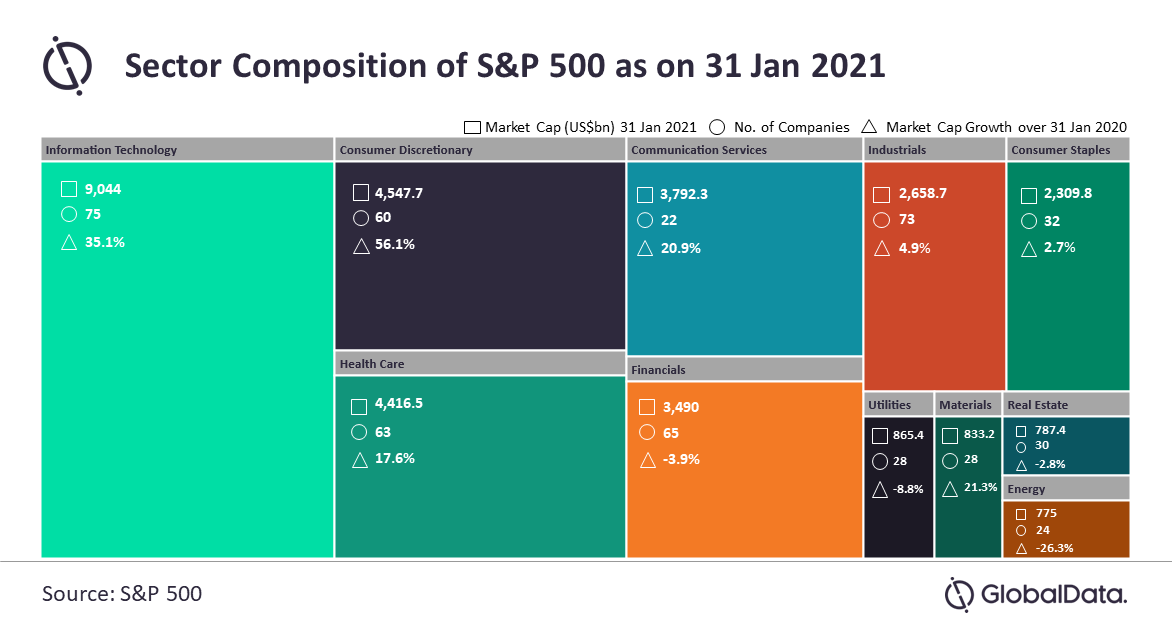 While communication services was bolstered by the likes of T-Mobile US, which posted a growth of 131% as its acquisition of Sprint and 5G expansion plans received a positive response from the investors, the overall sector was up by 20.9%. Other players growing more than 50% were Take-Two Interactive Software, Twitter, Activision Blizzard and Netflix.

In the energy sector, 20 out of 24 stocks were in the red over the previous year. With worsening market performance, energy stocks accounted for only 2.3% of S&P 500’s aggregate market cap.

Vala adds: “COVID-19 added another downside facet to the already battered energy sector as the world went into lockdown, which caused significant decline in oil consumption and the International Energy Agency does not expect it to return to pre-crisis level until 2023.”

With vaccine distribution gaining momentum across the globe, the stimulus package in the US and expected corporate revenue and earnings rebounds, market performance is expected to be brighter in 2021.