Economic activities in major Indian cities have been severely affected with the second wave of COVID-19 pandemic, which led to full or partial lockdowns across the country. Against this backdrop, the combined real GDP growth of nine major Indian cities has been revised downward to 9.28% in May 2021 from the earlier projection of 9.61% in January 2021, reveals GlobalData, a leading data and analytics company.

Andhra Pradesh, Delhi, Karnataka, Kerala, Maharashtra, Tamil Nadu, Uttar Pradesh, and West Bengal reported more than 65% of the total confirmed cases as on 23 May 2021. Maharashtra, Delhi started imposing lockdown since mid of April 2021. Presently several states including West Bengal, Uttar Pradesh, Bihar, Chhattisgarh, Tamil Nadu, Karnataka, Rajasthan among others have either imposed or extended lockdowns until the end of May. Eight of most affected states contribute more than 50% of India’s gross value added, which explains the impact of lockdown on the country’s economic growth.

Sharp spike in the number of cases put a huge pressure on the country’s weak health infrastructure. Non-availability of medicines, faltering vaccine administration and oxygen supply shortages resulted in an increase in fatality rate.

Aditi Dutta Chowdhury, Economic Analyst at GlobalData, comments: “With saving lives being the major concern, the economic matters took a back seat, which is likely to affect the economic recovery prospects of major Indian cities. However, unlike the first wave, manufacturing, e-commerce, construction sectors are not under restriction.”

According to GlobalData, nine major cities from the most affected states contributed approximately 15% of the country’s total GDP in 2020. Among them, real GDP growth forecast is revised downward by around 0.50 percentage points for Mumbai, Delhi and Vishakhapatnam metropolitan area, followed by Chennai and Lucknow (around 0.40 percentage points) in May 2021 compared to January 2021.

Despite major relaxation on economic activities compared to last year, imposition of localized lockdown dampened business activities in all sectors, except essential commodity, pharmaceutical industry. Meanwhile, daily wage laborers, small traders and workers in the tourism and hospitality business remained the most vulnerable. Construction activities in cities are also getting adversely affected due to the exodus of migrant workers. 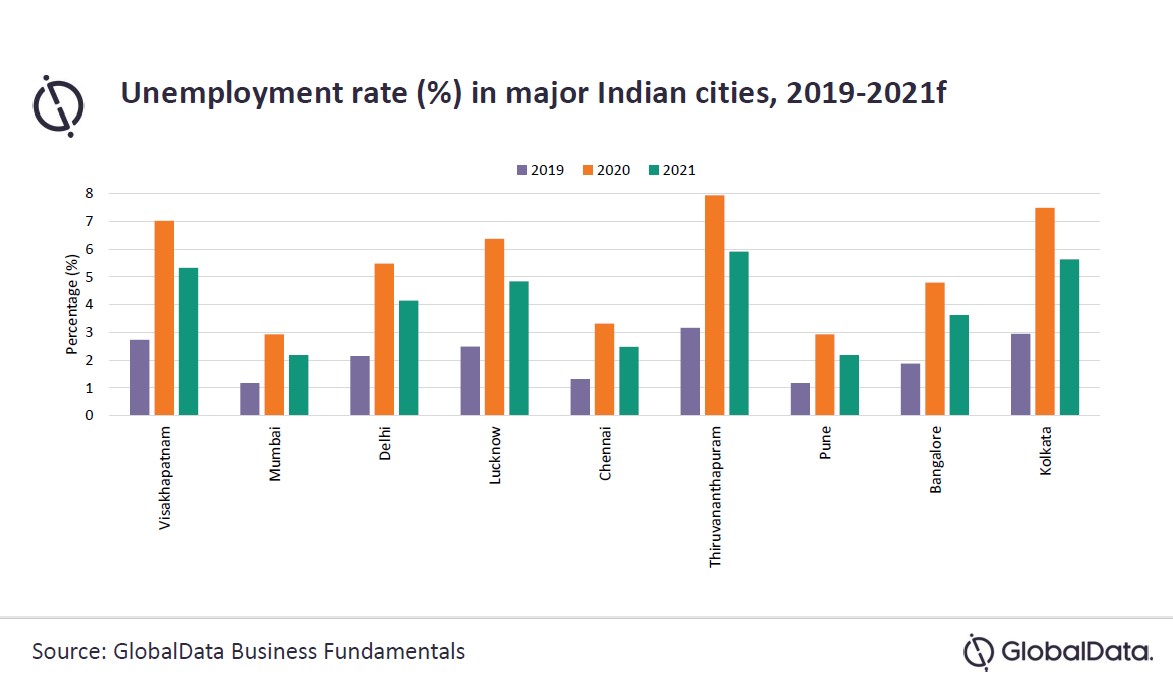 Although economic activities started recovering during the end of last year, the recent surge in cases and the consequent lockdown measures will keep the unemployment rate in major cities at a high level.

GlobalData projects the unemployment rate in Mumbai, Delhi and Kolkata at 2.2%, 4.1% and 5.6%, respectively, in 2021, which is lower than the rate recorded in 2020 but much higher compared to the pre-pandemic level.

Ms Chowdhury concludes: “The recovery of the cities will depend on the easing of restrictions and the restoration of economic activities, which seems clouded with the uncertainty given the present situation. Ramping up vaccination and epidemiological research for the infectiousness of the new variants of virus and proactive measures to build a resilient healthcare system will ensure the recovery of the Indian cities from this crisis.”