The diagnosed prevalent cases of Crohn’s disease (CD) in the eight major markets (*8MM) are projected to increase from 1,339,543 cases in 2019 to 1,629,940 cases in 2029, equating to an annual growth rate (AGR) of 2.17%, according to GlobalData, a leading data and analytics company. The natural course of CD, with low mortality, as well as improved survival, caused an increase in the prevalence of the disease over the past three decades. In line with this trend, the prevalence of CD is expected to continue increasing in the future.

The company’s latest report, ‘Crohn’s Disease – Epidemiology Forecast to 2029’, reveals that in 2029, the US will have the highest number of diagnosed prevalent cases of CD in the 8MM at 0.8 million, whereas Japan at slightly more than 48,000 will have the lowest number of these cases. The number of diagnosed prevalent cases of CD was higher in women than in men in the 8MM combined, though there are variations in the predominant sex by market.

Shilpa Shaji, MPH, Epidemiologist at GlobalData, comments: “The natural course of CD, with low mortality, as well as improved survival, caused an increase in prevalence of the disease over the past three decades. The burden of Inflammatory Bowel Disease (IBD) including CD is rising globally, with substantial variation in levels and trends of disease in different countries and regions. Understanding these geographical differences is crucial for formulating effective strategies for preventing and treating CD”. 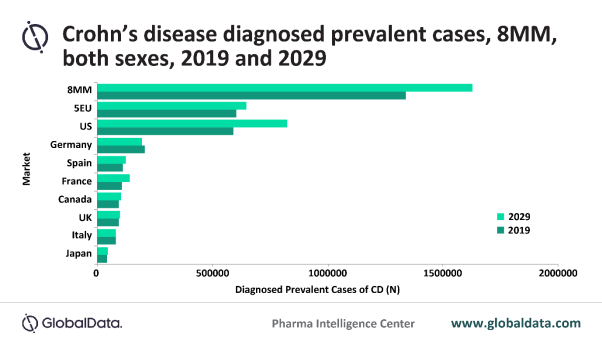 The exact causes of CD are still unknown. However, several risk factors for developing the disease have been identified and researchers believe a combination of environmental and genetic factors trigger an abnormal immune response in those with CD.

Shilpa concludes: “The experience of each individual affected by CD is different and the disease course of CD is characterized by periods of remission followed by periods of relapse, the length and severity of which differ from case to case.”