Deal activity in Asia-Pacific up by 3.9% in September 2020, reveals GlobalData

A total of 2,176 deals were announced in the Asia-Pacific (APAC) region during September 2020, an increase of 3.9% over the 2,094 deals announced during the previous month, according to GlobalData, a leading data and analytics company.

An analysis of GlobalData’s Financial Deals Database reveals that the deal volume during the month remained above the first quarter (Q1) of 2020 and Q2 monthly average levels.

Aurojyoti Bose, Lead Analyst at GlobalData, comments: “Though deal activity has been improving, the growth rate has slowed down compared to the double-digit growth witnessed during the month of June and July. This could be attributed to the subdued activity in key markets such as Japan and South Korea.”

With most Asia-Pacific countries failing to cease the upward trajectory of the COVID-19 crisis and escalating economic condition, the deal activity in the region has stalled. However, the past three months have displayed uninterrupted growth in moderate proportion, which could be a positive sign for the region to overturn the deal market in the coming months.” 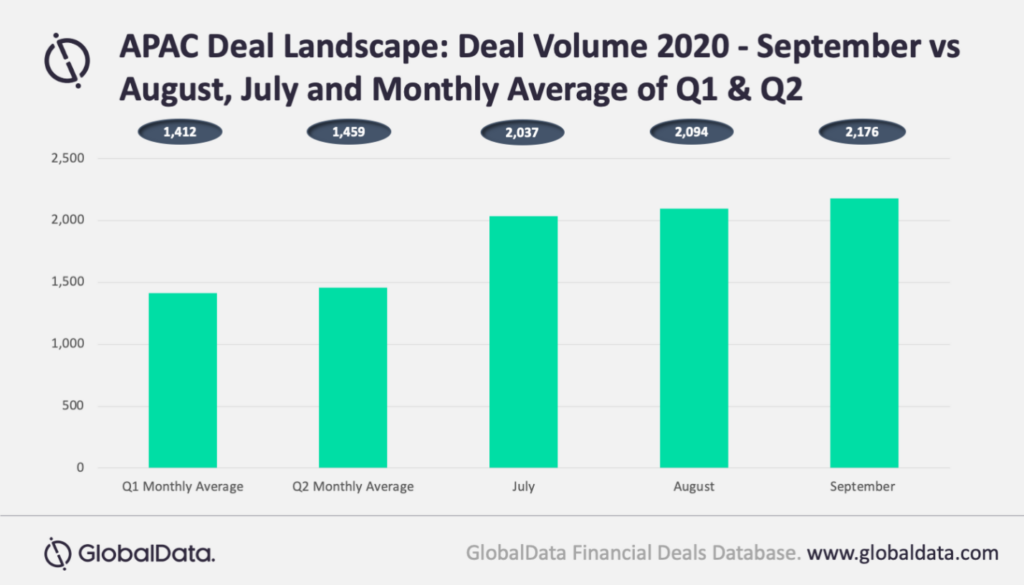 Deal types such as private equity, venture financing, equity offerings and partnership soared by 36.4%, 23.2%, 9.3%, and 6.3%, respectively, during September compared to the previous month while the number of licensing agreements, mergers and acquisitions (M&A) and debt offerings declined by 40.0%, 13.9%, and 6.1%, respectively.