Mergers and acquisitions (M&A) deal activity in the Asia-Pacific (APAC) region remained inconsistent during the fourth quarter (Q4) of 2020. Akin to most of the APAC countries, China also experienced inconsistent activity but continues to be a key global growth engine as global investors see it as an attractive investment destination with the further opening up of policies, reveals GlobalData, a leading data and analytics company.

An analysis of GlobalData’s Financial Deals Databases shows that a total of 1,835 M&A deals were announced in the APAC region during Q4 2020. The number of announced M&A deals in the region increased by 1.9% from 632 in October to 644 in November before shrinking by 13.2% to 559 in December. 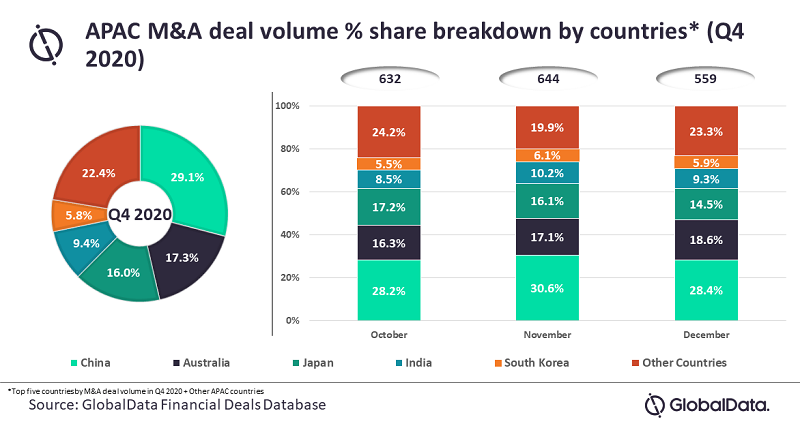 China, which is the leading APAC market and accounted for 29.1% share of the region’s M&A volume during Q4, also had its share of ups and downs. However, its share of deal volume always continued to stay around 30% during the quarter.

Aurojyoti Bose, Lead Analyst at GlobalData, comments: “There has been a clear divergence in M&A activity between China and other APAC countries. Apart from domestic M&A, China also managed to see sizeable inbound acquisitions with foreign players investing in acquiring Chinese assets.”

Mr. Bose concludes: “Even though the M&A deal activity witnessed fluctuating fortunes during the fourth quarter on account of the uncertain and volatile macro-economic backdrop, China is well placed to drive the growth of the APAC region in 2021.”