Fiscal 2019 appeared to be quite fruitful year as all but one of the top 25 global publicly traded global retailers reported YoY revenue growth – with seven seeing double-digit growth, reveals GlobalData. The data and analytics firm analyzed the year-on-year (YoY) change and compound annual growth rate (CAGR) of the publicly traded retailers in terms of revenue, operating profit and net profit over the past five years.

Keshav Kumar Jha, Business Fundamentals Analyst at GlobalData, comments: “In terms of revenue growth, the list was dominated by major e-retailers, including Alibaba, JD.com and Amazon, which clocked over 20% YoY revenue growth with their e-commerce sales grew by 51%, 23% and 18% respectively, due to a significant rise in annual active customers on their retail marketplaces, and faster fulfilment and delivery services.” 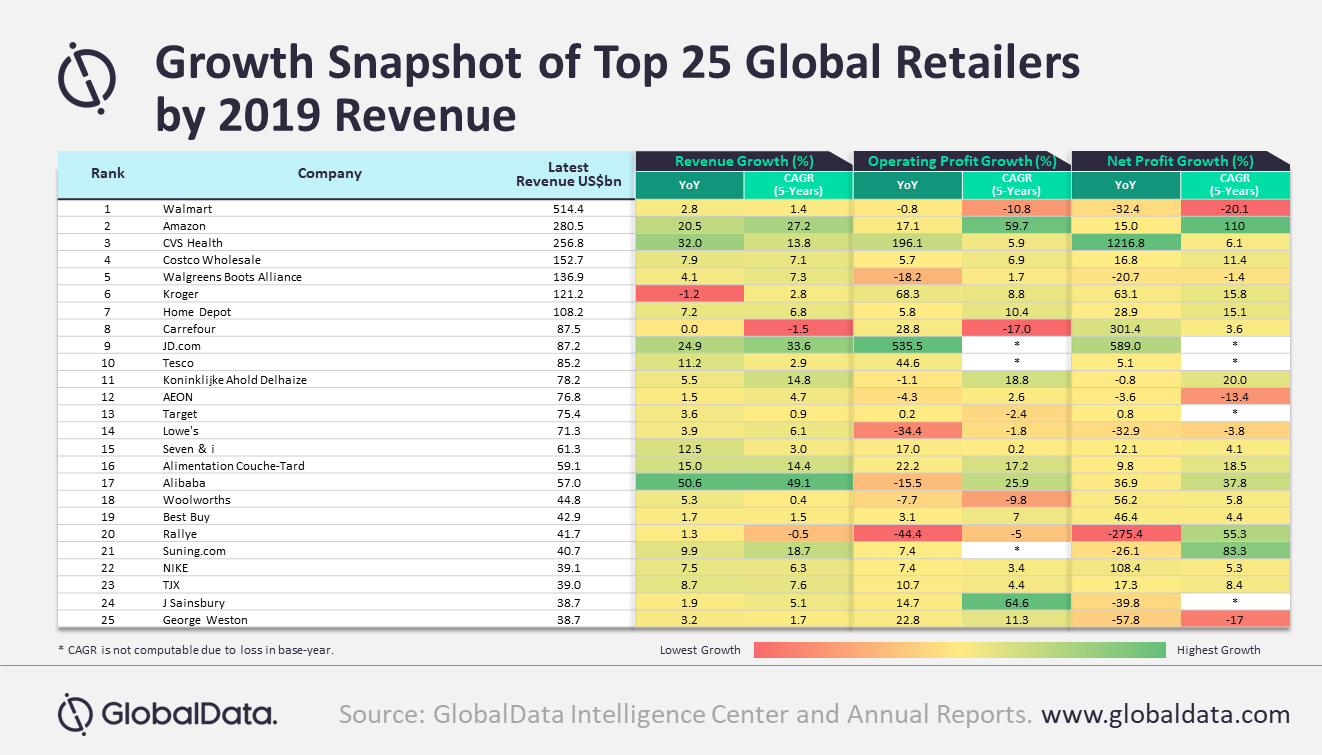 Apart from e-commerce players, CVS Health was the only company which saw over 20% YoY revenue growth. The acquisition of Aetna helped CVS Health to strengthen its top-line. Higher volume and brand inflation also led to the increase in the major US pharmacy retailer’s revenue streams. For Alimentation Couche-Tard, its acquisitions, rebranding and product offerings’ initiatives helped drive traffic in its stores and increase same-store merchandise revenue across the network.

In GlobalData’s ranking, Carrefour was the only player reporting flat YoY revenue growth and over 1% of negative revenue growth over the last five-years. Its sales declined in Europe, including France, which was partially offset by higher revenue growth achieved in Latin America and Asia regions.

Rallye and Lowe’s were the two major players with over 30% YoY decline in operating profit. Rallye’s operational expenses increased over 85% on a YoY basis. Lowe’s incurred pre-tax operating expenses of US$35 million related to exit and closure of its retail business in Mexico.

Jha continued: “Over 50% of companies in the top 25 reported double-digit YoY growth in their net income with six retailers recording over 50% growth. CVS Health and JD.com reported rises in net earnings due to higher revenue, improving operational performance, and favorable other income and expenses. Kroger and Carrefour’s cost-optimization initiatives helped to improve their net earnings.”

NIKE and Woolworths were the other two players recording over 50% YoY net profit growth. An increase in revenue, an improving operational performance, and lower than expected tax led to the rise in NIKE’s net earnings. Woolworths’ robust revenue stream, and usage of technology to drive process improvements resulted in a significant rise in net earnings.

Rallye, George Weston and J Sainsbury were the three retailers recording 40% or more decline in their YoY net profit. An increase in operational expenses resulted in a significant reduction in net earnings for Rallye, whereas an increase in interest expenses led to the decrease in net profit for George Weston. The costs associated with the closure of several stores had a toll on Sainsbury’s profits.

Jha added: “The impact of the COVID-19 pandemic on the retail sector is difficult to assess as there is no clear end to this health crisis in sight. In the ‘new normal’, retailers will experience a rise in their operational costs due to mandatory steps taken to keep employees and customers safe. Many retailers will also delay their investments in improving store operations or opening new stores. A slowdown in economies worldwide may lower the cash flow and customers could curtail their spending on non-essential goods, which would adversely impact retailers business.