Diagnosed prevalent cases of chronic heart failure to reach 32 million by 2028 in the 8MM, says GlobalData

Nearly 40% of all diagnosed prevalent cases of Chronic Heart Failure (CHF) in the eight major markets (8MM*) occur in the elderly population, and this is estimated to increase by a further 40% by 2028. The major drivers for this trend include increasing life expectancy, early diagnosis of heart failure (HF) by improved screening and detection of HF, as well as the widespread adoption of effective treatment strategies to manage HF patients with multiple comorbidities.

Arunkumar N.V, MPH, Epidemiologist at GlobalData, comments: “The substantial   increase in comorbidities such as coronary artery disease (CAD) and hypertension may be driving the number of diagnosed prevalent cases to rise in the elderly. It is observed that HF with preserved ejection fraction (PEF) is one of the common cardiac complications of longstanding hypertension. In 2018, the 8MM saw more than half of CHF patients experience CAD or hypertension as a major comorbid condition. 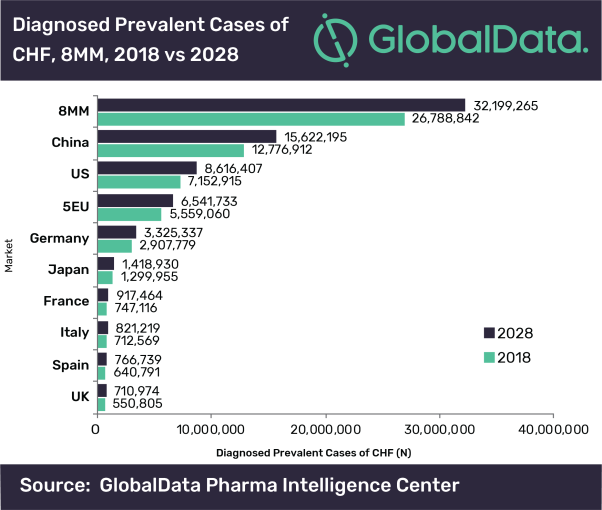 Despite advancements in the treatment of CHF, the major unmet needs in elderly CHF patients are improved adherence to treatment guidelines and additional effective therapeutic options to manage CHF with multiple comorbidities.

Arunkumar N.V, concludes: “The improvement of screening techniques and diagnostic approaches over the years has led to better diagnoses, as reflected in the increased burden of CHF. Effective strategies to prevent lifestyle diseases such as hypertension and diabetes mellitus during early adulthood may help prevent the occurrence of CHF in the elderly”

*8MM: The US, France, Germany, Italy, Spain, the UK, Japan and China