Diagnosed prostate cancer cases to reach 0.67 million in the 8MM in 2028

Diagnosed incident cases of prostate cancer in the eight major markets (8MM*) are projected to increase from 0.56 million cases in 2018 to 0.67 million in 2028 at an annual growth rate (AGR) of 1.94%, according to GlobalData, a leading data and analytics company.

The company’s latest report, ‘Prostate Cancer – Epidemiology Forecast Report to 2028’, states that an increase in the elderly population, as a result of increasing life expectancy, is driving the number of cases to rise.

Suneedh Manthri, Associate Project Manager of Epidemiology at GlobalData, commented: “In the US, prostate cancer is the most common cancer in men after skin cancer, and it is the third most common cause of cancer-related death in men. In 2018, the US accounted for 30.46% of the diagnosed incident cases of prostate cancer in the 8MM, with 0.17 million cases in 2018, rising to 0.20 million in 2028.” 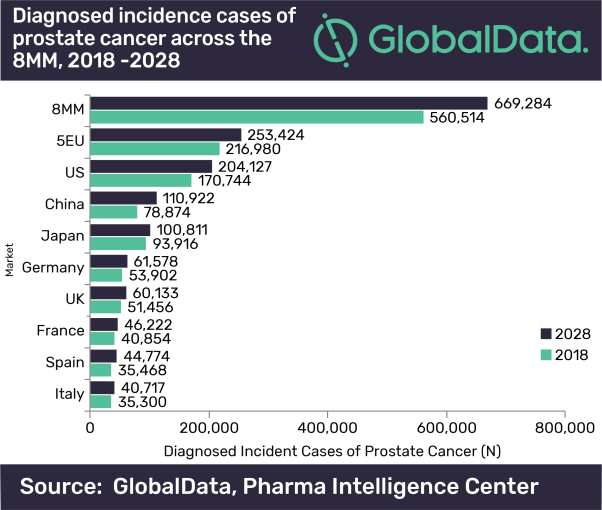 GlobalData’s report also found that diagnosed prevalent cases of prostate cancer in the 8MM are expected to increase from 2.34 million cases in 2018 to 2.72 million cases in 2028 at an AGR of 1.63%. This growth is partly attributed to the moderately rising trend in the incidence of prostate cancer in the 8MM, combined with changing population demographics in the next ten years.