Directed energy weapons (DEWs) have finally reached top power levels and the effectiveness to allow them to be used on the battlefield. Combat platforms are expected to be equipped with DEWs by 2025, working alongside conventional weapons such as guns and missiles, according to GlobalData, a leading data and analytics company.

Military forces are seeking to launch and deploy effective DEWs at the earliest opportunity and demand is surging as the global value for DEWs reached US$4.1bn in 2020.

GlobalData’s latest report, ‘Thematic Research – Directed Energy Weapons (2021)’ states that the US currently leads the development of DEWs worldwide with 41.6% market share, followed by China and some European countries including France, Germany and the UK. Indigenous initiatives for the development of DEWs are minimal in Africa and Latin America. Israel, Iran and UAE are developing DEW in the Middle East. Israel has continuously worked in association with the US to make significant progress in the DEWs sector. 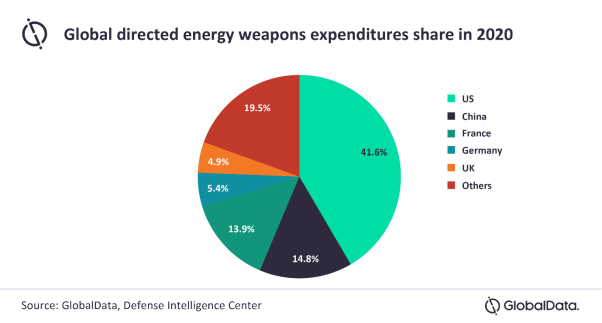 Captain Nurettin Sevi (Rtd.), Turkish Navy, Defense Analyst at GlobalData, comments: “Today’s DEWs are designed to provide short-range air defense and close-in protection for combat platforms. These use a range of different effects depending on the tactical scenario including dazzling, jamming its targeting sensors, and damaging or even destroying the incoming threat. The US Armed Forces currently have 100-150 kW laser weapons, but they require more powerful DEWs against missiles. Therefore, they are pushing to improve the power output of lasers to over 300 kilowatts to defeat supersonic cruise missiles, whose reinforced nose cones allows for surviving the heat of friction from their rapid progress through the air. This particular feature makes them more robust to a laser shooting.

“While countries have been developing DEWs for their combat platforms, countermeasure systems are also being developed against energy weapons directed in the same way. For instance, AKHAN Semiconductor and partner Lockheed Martin developed a new diamond-based coating technology to act as a countermeasure to DEWs. Moreover, BAE Systems have been working on a directed energy laser, and lens system called a Laser Developed Atmospheric Lens (LDAL) to protect friendly forces from attacks from high-power laser weapons for several years. DEW countermeasure studies, including advanced materials, most likely will increase towards 2025.”