Discussions around Afghanistan by businesses rise 16% in H1 2021 on account of political turmoil, reveals GlobalData

17 Sep 2021
Discussions around Afghanistan by businesses rise 16% in H1 2021 on account of political turmoil, reveals GlobalData

The prevailing uncertainty around business and trade in Afghanistan due to the ongoing political turmoil fueled a 16% rise in discussions around the country in all filings of the companies during H1 2021 compared to the prior year period, according to the Filing Analytics Platform of GlobalData, a leading data and analytics company.

Rinaldo Pereira, Senior Business Fundamentals Analyst at GlobalData, comments: “Geopolitics is the central theme in 2021 company filings discussing Afghanistan. ‘Economic Instability’ and ‘Armed Conflict’ were the keywords mentioned by several companies in 2021. Firms are wary of risks around doing business in Afghanistan, and the average word count of risk section around the country in the annual and quarterly reports is already up by 53% in 2021* compared to 2020.” 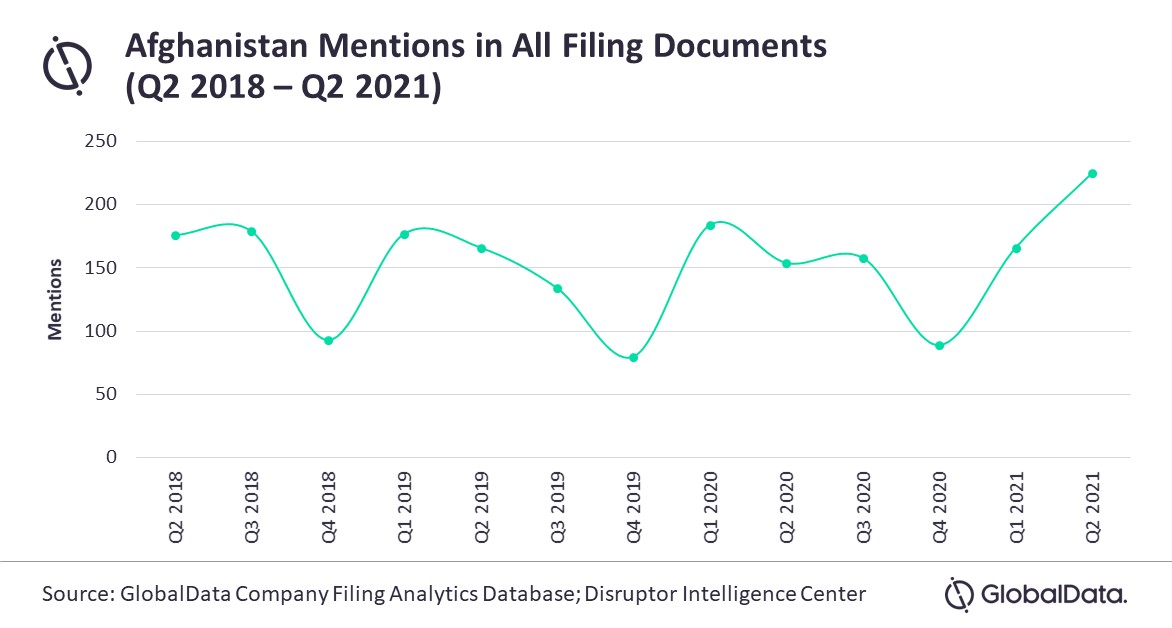 Gargi Rao, Economic Research Analyst at GlobalData, comments: “Even though Taliban dominates the political scenario at present, they will not have access to US$10bn Afghanistan central bank reserves, which is held by the US. With multilateral agencies including EU, the IMF and the World Bank halting funds, it will further deter the growth prospects amid the COVID-19 pandemic.”

Mr Pereira concludes: “Afghanistan’s possible relationship with China and Pakistan for investment is doing the rounds in the news. However, few Chinese companies have discussed the country in 2021 filings, and it seems like a topic best avoided for the Mainland’s firms in the wake of Western sanctions. That said, several Pakistan companies discussed Afghanistan in 2021- yet ‘exports’ were mentioned far less compared to 2020 or 2019.”