Dos Bocas refinery will be a challenging investment even with reduced capacity, says GlobalData

14 May 2019
Dos Bocas refinery will be a challenging investment even with reduced capacity, says GlobalData

Following recent news that Pemex and Mexico’s Energy Ministry will be the project managers of the plan to build a new refinery after engineering firms bids were considered out of budget;

“Although not yet official, lowering the processing capacity of the refinery would not be a surprise at all, and seems in fact a logical move after three of the companies invited to bid went beyond the requested budget and timeline to build the 340 mbd plant. These engineering firms are practically telling the government that a refinery of that capacity cannot be built with US$8 billion in less than three years. They estimated a cost in between US$10 to $12 billion and to complete in 2023 or 2025.

“Now, and according to some reported information, the government might be planning to do two distinct phases and at the moment the proposal is for an initial phase for 170 mbd of capacity. The government would then assess for a later second complementary phase which would be planned but not necessarily executed during this administration. Even with a smaller capacity, the time to complete is still challenging since usually these projects take on average no less than five years. Also the original plan requires a processing capex per barrel of US$23,500, which is below the average cost if compared against relatively new built refineries internationally. Being cost efficient in construction might be challenging since neither Pemex nor the Energy Secretariat have recent experience as project managers of downstream projects of such size. 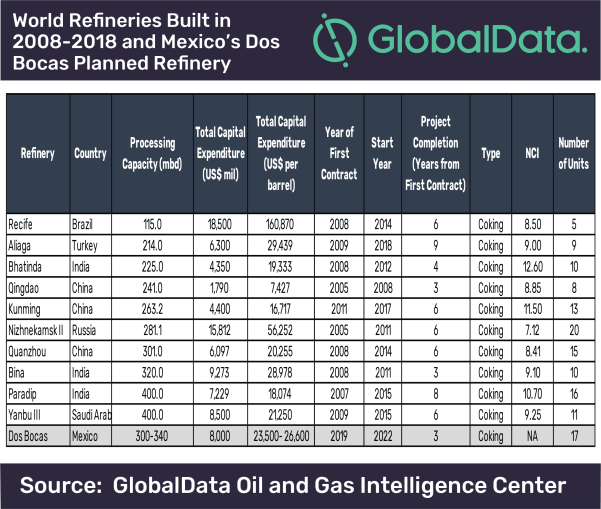 “There is little doubt in that building a new refinery with Mexican contractors will create thousands of jobs benefiting local economies, but the ultimate question is whether the project would effectively help reduce gasoline and diesel imports while being competitive and profitable. After all, part of the money invested in this project could be added to the US$1.3 billion allocated to the existing refineries in order to increase their capacity utilization rate, which is currently still below 40%.

“What is more, Pemex still needs to stabilize its oil and gas production and the company does not seem to have many financing options, since debt borrowing is minimized and the farm-out strategy devised to help Pemex increase exploration and production is frozen. The energy security argument presented by the government about a lower dependency on imports is not an unreasonable strategy in the mid-term, however right now capital remains scarce and the new refinery is not among the best investment decisions in Pemex’s portfolio of projects.”