China’s claims over the South China Sea territory and the increasing terrorists’ aggressions over the past decade have fueled the military expenditure of the Philippines. The country’s focus on developing the military capabilities through its ambitious Horizon I, II, and III programs is most likely to influence its defense acquisition expenditure which is projected to grow exponentially at a robust compound annual growth rate (CAGR) of 11.29% to reach US$1.2bn between 2021-26, forecasts GlobalData, a leading data and analytics company.

GlobalData’s report, ‘Philippines Defense Market – Attractiveness, Competitive Landscape and Forecasts to 2026’, reveals that after a slight dip in defense acquisition spending caused by the difficult economic scenario of COVID-19 pandemic, the total defense expenditure will continue to grow at a robust CAGR of 7.65% to reach US$5.8bn in 2026. 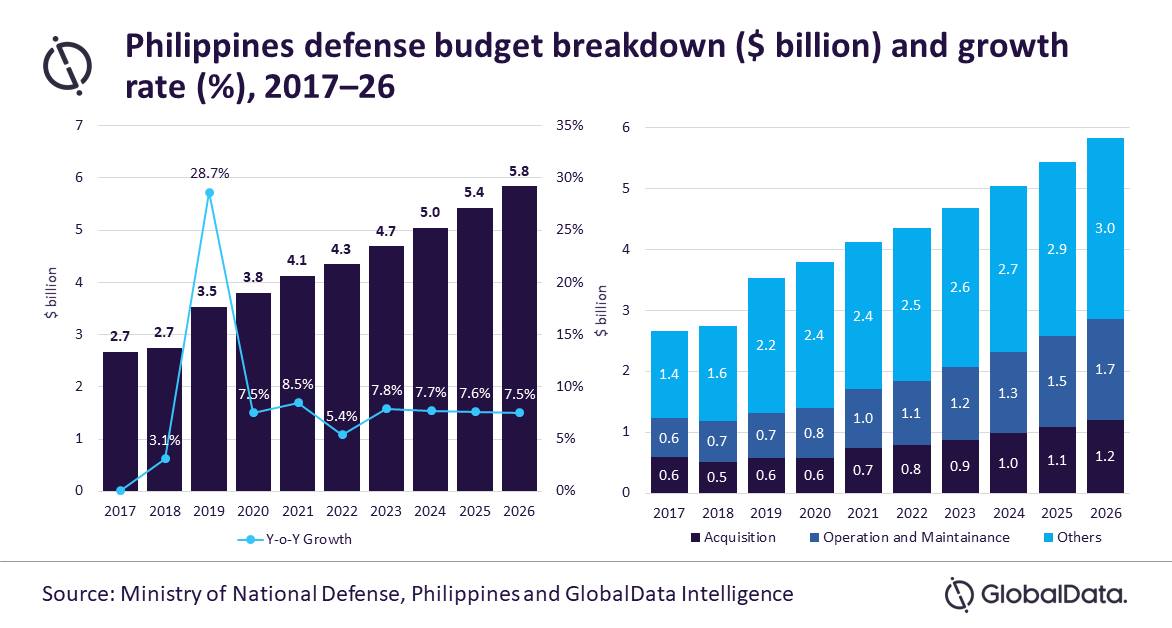 Akash Pratim Debbarma, Aerospace & Defense Analyst at GlobalData, comments: “Even though the economy suffered due to COVID-19, it is not hard to see that the territorial disputes over the South China Sea and historical internal challenges have influenced their decisions, both in procurement and future aspirations. The Horizon I, II and III programs are demonstrations of its commitment to secure its national interests and defend itself against any external aggression.

“Being an archipelagic country, Philippines’ decision of procuring Pohang Class Corvettes and Offshore patrol vessels will strengthen the country’s operations in its waters and secure its strategic interests further. The new corvettes are most likely to be equipped with advanced weapons and guided missiles which will play a major role in improving Philippines’ combat abilities.

“Philippines’s decisions on future capabilities are not only driven by the changing strategic environment that the country finds itself, but a recognition and understanding of the complex challenges unique to its geography and its endeavor to provide a minimum credible defense in the face of aggression.”