The Philippines is among the fastest-growing economies within the Southeast Asian countries. As such, the retail industry is forecast to witness a healthy compound annual growth rate (CAGR) of 8.2% during 2016-2021, one of the highest in the Asia-Pacific region, according to leading data and analytics company GlobalData. Food and grocery sector is the largest within the Philippines’ retail industry accounting for 65% share of the overall retail sales in 2016.

The company, in its report, ‘The Food & Grocery Retailing in the Philippines’, highlights the major factors impacting the growth of food and grocery sector in the country, the sales of major categories such as drinks, tobacco, household products and food, key players and sales through various distribution channels. 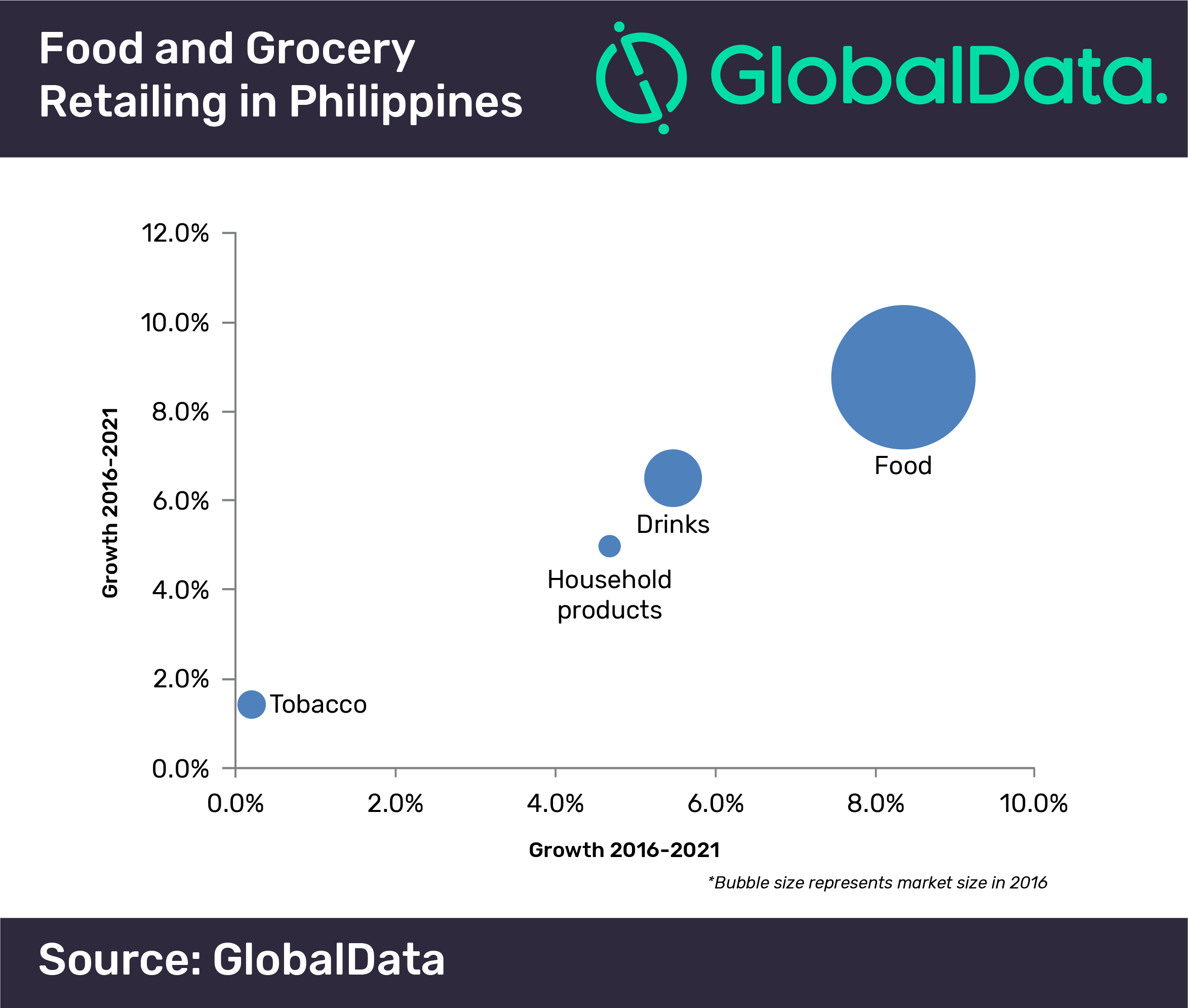 Within the sector, food and drinks are the largest categories accounting for 82.4% and 12.8% share of the sector sales respectively in 2016. In terms of growth, food and drinks are again the fastest growing categories, while tobacco is estimated to grow at a faster growth during 2016-2021 compared to 2011-20216. The food and grocery sector is mainly driven by factors such as an improving economy, increased consumer spending and a rising middle class population that indulge in better quality and health oriented products. In addition, an increasing number of food specialists are offering new packaged food variants in easy to carry and consume formats to cater to the increasing working class, fueling the growth of this sector.

Among the various channels of distribution, convenience stores is the leading distribution channel accounting for a share of 38% in 2016, followed by hypermarkets, supermarkets and hard discounters and food and drinks specialists. Sales through online channel, albeit marginal, are projected to register the fastest CAGR of 14.9% over the period 2016-2021. Suresh Sunkara,retail analyst at GlobalData, comment: “Sales through online channel is gaining traction over the past few years, driven by increased smartphone penetration and the growing popularity of e-commerce among the younger population.”

The Food and grocery sector in the Philippines is highly fragmented with majority consumers preferring local stores (sari-sari stores) for day to day grocery shopping. The top 10 retailers in the country together accounted for less than 10% share in 2016. Prominent retailers include Puregold Price Club, Robinsons Supermarket, SM Group, Savemore and 7-Eleven among others. Among the top 10, the sector is dominated by local players with nine of the top 10 retailers having local origin and 7-Eleven being the sole international retailer. However, in the wake of the improving economy and rising working class, large international retailers such as Lawson and Family Mart are making inroads into the country paving path for a more organized retail landscape.

Against the backdrop of an improving economy, rising middle class with a penchant for convenience, increasing household consumption and health awareness, the food and grocery sector is forecast to grow at a CAGR of 8.2% over the period 2016-2021. In addition, the entry of large international retailers into the country and increasing consumer interest in large store formats are expected to add to the growth of the sector.