Electric vehicles to disrupt but not eradicate turbocharger fitment

The relentless pursuit of lower emissions and fuel consumption has driven a significant jump in the fitment of turbocharged engines over the last two decades – first with turbocharged diesels and then with downsized gasoline engines. However, the forecast increase in electric vehicle up-take has led some to question the longevity of the turbocharger. A closer analysis of the figures suggests a more nuanced picture, says GlobalData, a leading data and analytics company.

GlobalData’s latest quarter’s component volume and fitment forecasts reveal that turbochargers can expect volumes to increase for at least the next 15 years.

Mike Vousden, Automotive Analyst at GlobalData, commented: “Volume forecasts suggest unimpeded growth for turbochargers for the next 15 years, but that tells only part of the story. While markets such as Europe and South Korea already have high levels of turbocharger fitment, it is caused both by increasing motorization of developing countries and also increasing regulation of greenhouse gas emissions from new vehicles, which is driving downsizing of gasoline engines and presenting opportunities for turbochargers. Volumes will increase from 42.7 million units in 2018 to more than 64.4 million in 2034 despite a fall in overall global fitment of forced induction systems.”

Delving deeper into GlobalData’s figures reveals pockets of more rapid growth can be found in technologies closely related to exhaust-driven turbochargers. One such technology is the electrically powered turbocharger (e-charger) – these rely on 48V subnets – increasingly coming to the fore as ancillary power requirements escalate in modern vehicles – to power electric motors that spin compressors to generate boost more quickly. GlobalData expects e-charger volumes to jump from fewer than 6,000 in 2018 to more than one million by 2034. 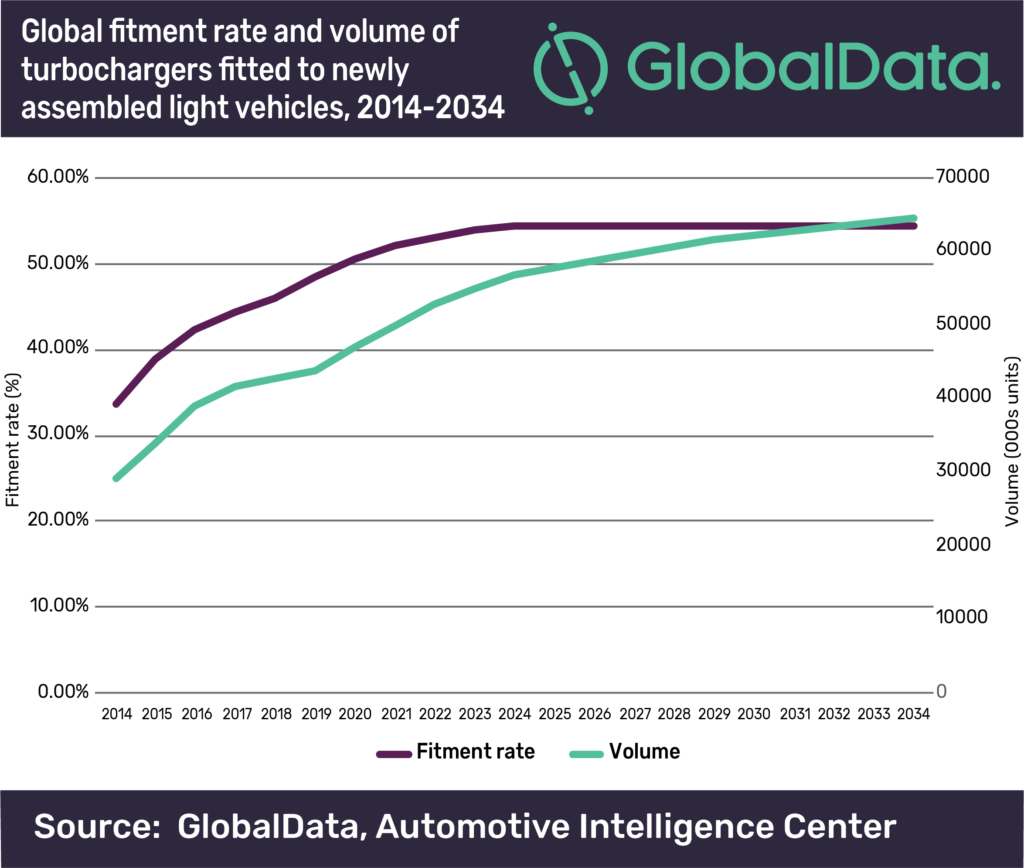 There is no question that electric vehicles will become the dominant force in the global light vehicle market, which might lead to the assumption that turbochargers will, ultimately, cease to be needed. However, there might be a last-minute reprieve from a left-field source – hydrogen fuel cell electric vehicles. Fuel cells provide energy to electric motors in the same way a lithium-ion battery pack does but are simply refilled with hydrogen when empty rather than being recharged from a plug. Using a combined exhaust and electrically driven turbocharger, air pressure inside the fuel cell can be increased, allowing it to generate more electricity, more efficiently.

Vousden adds: “The turbocharger market certainly faces disruption from electric vehicles and overall fitment rates will drop as a result. However, overall market volumes are still likely to increase thanks to increased motorization in the developing world with a simultaneous drive to reduce vehicle emissions, and from new adjacent technologies such as turbochargers for hydrogen fuel cells.”