As urban world is moving towards the developing world, GlobalData, a leading data and analytics company, forecasts that 88% of the world megacities will be based in developing economies of Asia, Europe & Central Asia, Latin America and Middle East & Africa by 2025.

However, the maximum growth will come from cities in the developing world. By 2025, seven emerging megacities will have GDP over US$0.5 trillion. Shanghai will lead the table with GDP close to US$0.85 trillion, followed by Beijing (US$0.78 trillion), Mexico City (US$0.68 trillion), Shenzhen (US$0.67 trillion), Chongqing (US$0.61 trillion), Guangzhou (US$0.57 trillion) and Moscow (US$0.52 trillion). Riding on the back of good economic growth, emerging megacities from India are expected to show maximum growth between 2018 and 2025 with Mumbai registering the fastest growth of 126.3%, followed by Hyderabad (109.8%) and Bangalore (105.5%) during the same period.

Growing consuming class to give edge to emerging megacities

The working age population of emerging megacities is expected to grow at 8.3% between 2018 and 2025, compared to 1.0% growth of developed megacities during the same period. Furthermore, rising prosperity in these megacities has also enabled the emergence of a new wave of middle and affluent consumer classes, which aspire for better standards of living.

Consumer spending in emerging megacities is approximately US$4.2 trillion purchasing power parity (PPP) and GlobalData expects this amount to increase to US$6.3 trillion (PPP) by 2025, with 44% of it coming from megacities in China and India. Moreover, these megacities will be home to approximately 109.2 million households with an average income of more than 20,000 Int’l$ (PPP) by 2025. 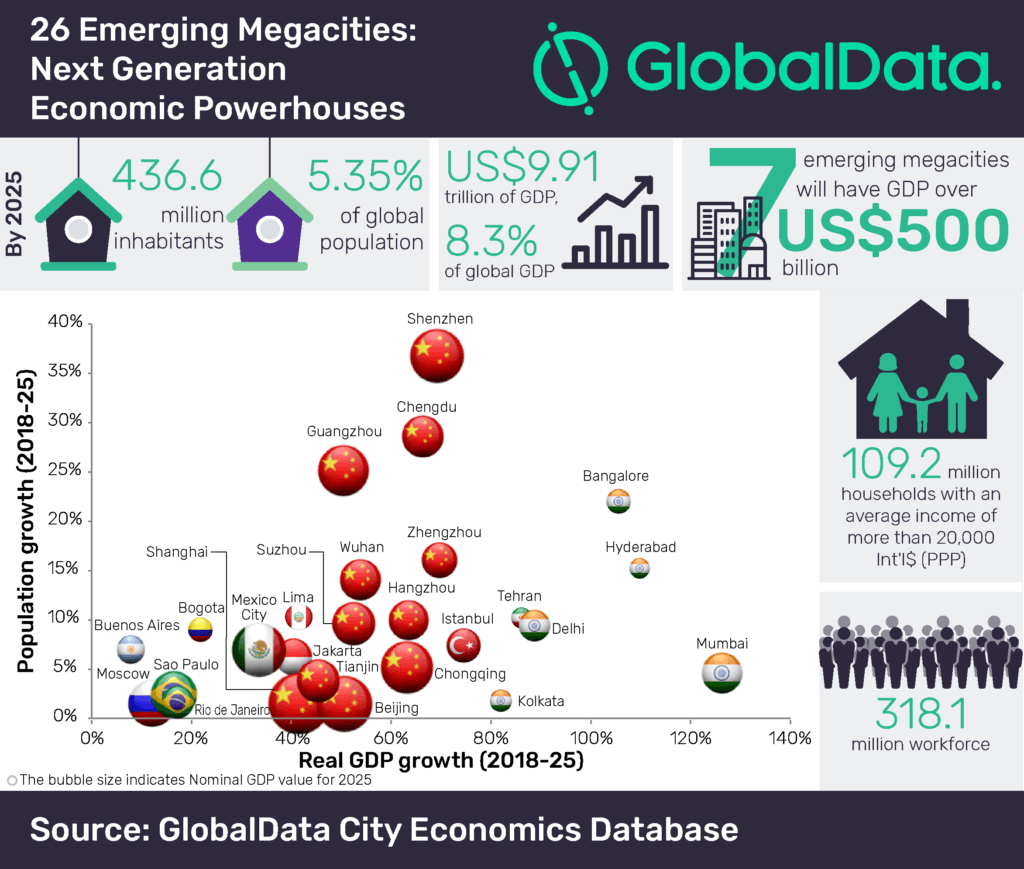