While the ‘big five’ European soccer leagues lead the way, in terms of the value of their front-of-shirt sponsorship deals, it is the English Premier League that generates the most revenue. Clubs in the league receive 47% more from partners than the next highest revenue generating league, Germany’s Bundesliga, says GlobalData, a leading data and analytics company.

The company’s latest report, ‘Front of Shirt Sponsorship 2020-21’, reveals that the top five European leagues generate over $1.15bn each season from their front-of-shirt partners alone. In contrast, the next ten leagues generate only $289m per season between all clubs, according to UEFA coefficient rankings.

Conrad Wiacek, Head of Sport Analysis at GlobalData, comments: “Front-of-shirt partners for clubs in the English Premier League spend over $409m per season for the most high-profile piece of sponsorship inventory. Thanks to the way the Premier League has built its presence overseas, its teams can drive significant revenue from brands around the world who are using the league and member clubs to build brand presence in new markets and drive interest in their products.” 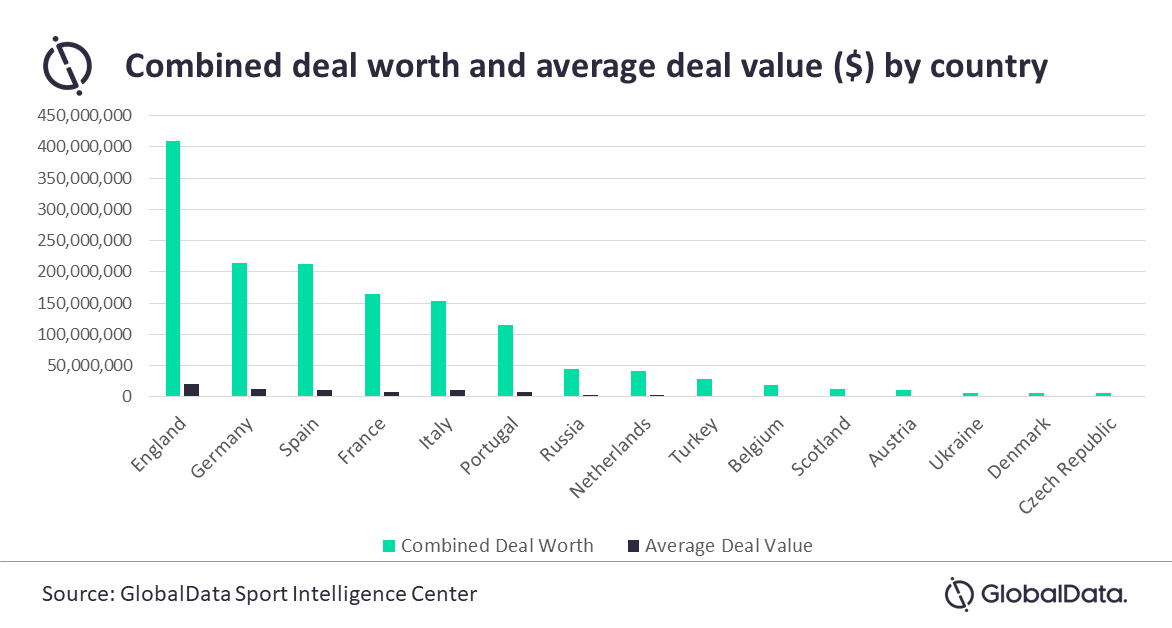 The English Premier League, thanks to its numerous high-profile rights deals in markets such as the US and China, has become a marketing behemoth. It benefits from many brands, especially those in the gambling and gaming space, using front-of-shirt deals as media buys to appeal to both international and domestic audiences. This global footprint means brands are likely to see the league as the perfect vehicle for utilizing marketing capital, leading to many brands without a UK presence developing relationships with English clubs. While COVID-19 has yet to significantly impact this market, some disruption cannot be ruled out moving forward.

Wiacek continued: ‘‘With a couple of large agreements such as Manchester United’s Chevrolet deal due to expire at the end of 2021, the impact of COVID-19 is yet to be truly tested. Several sectors that have been a strong source of revenue in terms of sponsorship deals have been impacted i.e. airlines, so clubs will need to work much harder to demonstrate value in order to maintain their existing revenue, which may lead to a decrease in Front of Shirt sponsorship values.

“However, the competitiveness of the English Premier League has always been a strength, helping to drive brand interest and revenue. The Manchester United deal could be an interesting test of the league’s continuing dominance. The league’s competitiveness is perhaps the reason behind Germany’s Bundesliga surpassing LaLiga in terms of driving sponsorship revenue. While the Spanish top flight boasts the two most popular clubs, with Real’s front-of-shirt deal with Emirates the most expensive in Europe valued at over $81.7m – based on social media statistics in Real Madrid and Barcelona – both the Premier League and Bundesliga collectively generate more revenue from front-of-shirt deals than LaLiga teams, which speaks to the strength in depth both leagues possess, and which can be lacking in Spain’s top flight.”

With the average deal value in the English Premier League coming in at over $20m per season, in contrast to just over $11m in Germany and over $10.6m in Spain, this highlights the strength of the English top flight as a marketing platform – with the value coming from all teams, as opposed to a handful in Spain and France.

Information based on GlobalData’s report: ‘Front of Shirt Sponsorship 2020-21’

New Balance and AS Roma deal highlights shift to pay-for-performance model
Women’s sports forge their own commercial path through new brand sponsorship deals
29.5% of total sponsorship spend in Serie A channelled towards Juventus
Clothing & accessories worth an estimated $360.90m annually in La Liga sponsorship
Significant jump in number of non-endemic jersey sponsorships seen at the League of Legends World Championships