The current backlash against diesel, also known as de-dieselization, has resulted in consumers regarding Euro 6 engines, that meet all the latest emission requirements, being considered as bad for air quality as a Euro II diesel. Additionally, some cities have introduced legislation to place restrictions on the use of diesel vehicles, while others are planning outright bans for diesel vehicles in the future, according to GlobalData, a leading data and analytics company.

GlobalData’s latest report, ‘De-dieselization – Thematic Research’, reveals that there has been a stark fall in diesel demand in Europe since 2016. Europe’s big five markets (5EU*) which account for some 80% of West European light vehicle sales, have seen diesel penetration fall from 50.5% in the passenger vehicle segment to 37.1% in 2018.

Calum MacRae, Director of Automotive Product Development at GlobalData, commented: “The effect of this change has been deleterious for the industry. Fleet CO2 emissions tracked continuously downwards since 2000, but registered a marginal uptick in 2017 that became more pronounced in 2018.” 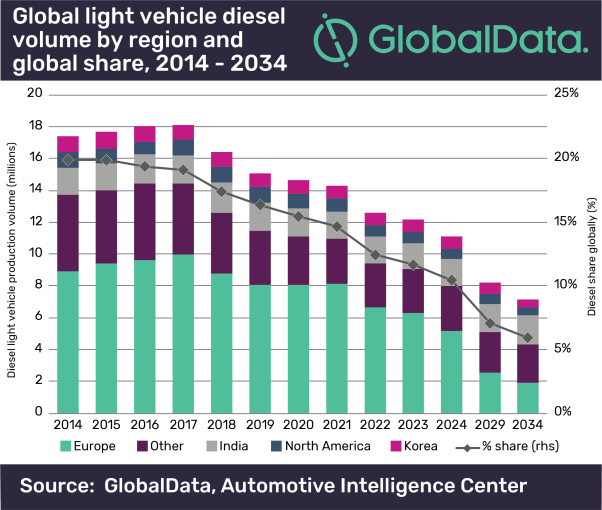 Diesel was a primary instrument for meeting European Commission (EC) rules for CO2 emissions in 2020/21 as they offer a relatively cost-effective means of improving fuel economy. Now, original equipment manufacturers (OEMs) are in a position where they have to rush electrified vehicles to market to ensure their fleet CO2 emissions are low enough to avoid punitive fines from the EC.

MacRae adds: “From 2019, if the average emissions of an OEM’s fleet exceed its target in a year, the OEM has to pay a fine of €95 for each registered car that is CO2 g/km over their specified target. GlobalData’s analysis reviewed the OEM groups in Europe with sales above 300,000 units in 2018, their 2018 CO2 performance and the 2021 target.

“Simplified scenarios were then developed – excluding eco-innovation credits that can be claimed – that assesses the scale of non-compliance fines possible among the OEM groups, starting with the fines likely if all OEMs improve by 1.55%, the compound annual growth rate (CAGR) recorded by the European industry for overall CO2 in the 2012-2018 time period. At the CAGR rate of improvement even the Toyota-Mazda pool would face a fine of €830m, out of fines totaling more than €24.5bn. If the industry improved its performance by 5% on average fines would total €9.5bn.”

That calculation assumes that the OEMs progress towards 2021 at the average rate of 1.55%, which is the CAGR the industry managed in the 2012-2018 period. The worst hit of the OEMs would be VW, due to its sales volume and distance from its target, which would face a penalty of over €6 billion – some 50% of its 2018 net profit – in the scenario.

However, given the large-scale investments OEMs are making in the electrification of their fleets, there is every chance that the industry will be able to improve its CO2 emissions at a faster rate than it has so far. If an average 7.5% annual reduction in CO2 is achieved between now and 2021 the penalties would total just over €1bn and be payable by only four OEMs.

MacRae concludes: “These are uncertain and worrying times for the OEMs. Up until the last few years market acceptance for diesel had been proven. Demand for electric vehicles at the level required by the OEMs is by no means certain. Many will be anxiously working out at which price point they can afford to take a loss on electrified vehicles that will negate the CO2 fines they potentially face.”