In a bid to diversify its business beyond smartphones, China-based electronics giant Xiaomi Inc. (Xiaomi) recently acquired autonomous driving technology startup DeepMotion, Inc (DeepMotion) and registered a car company for its electric vehicle (EV) segment. Subsequently, discussions around ‘electric vehicles’ among Twitter influencers and Redditors soared nearly by 300% during the last 90 days (ended on 25 October) compared to the previous 90 days on the Social Media Analytics (SMA) Platform of GlobalData, a leading data and analytics company, 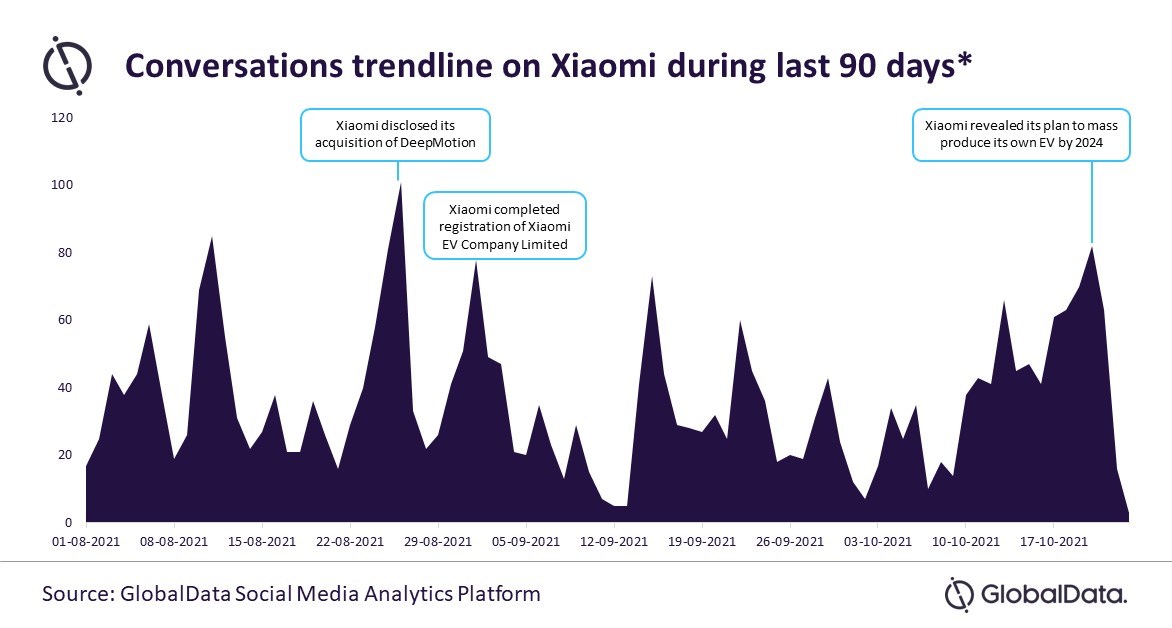 The recent rise in conversations around Xiaomi on GlobalData’s SMA Platform was noticed in October, when the Chinese smartphone maker announced to mass produce its own electric cars by 2024.

Smitarani Tripathy, Influencer Analyst at GlobalData, comments: “Influencers on GlobalData’s SMA feel Xiaomi’s step on automotive sector as an epoch of the company from smartphones to IoT and then EV. Most of the influencers’ sentiments were positive as the company is spearheading a drive to go beyond smartphones. Influencers expect Xiaomi’s foray into EV to be challenging due to increasingly crowded China’s EV space.”

In August, a spike in discussions was observed when Xiaomi acquired DeepMotion to enhance the technological competitiveness of its EV business. Another spike was noticed when the Chinese property developer The Evergrande Group announced it was in talks with Xiaomi to sell its EV unit stake.

Another surge in EV discussions was noticed in September, when the Chinese tech giant officially registered a subsidiary named Xiaomi EV for its electric vehicle segment.