The total fixed communications services revenue in China is expected to increase at a compounded annual growth rate (CAGR) of 2.5% from US$95.2bn in 2020 to US$107.5bn in 2025, supported by the growth in fixed broadband segment, according to GlobalData, a leading data and analytics company.

An analysis of GlobalData’s China Fixed Communication Model indicates that the fixed voice service revenue will decline at a CAGR of 0.3% over 2020-2025, due to the falling circuit-switched subscriptions and drop in fixed voice average revenue per subscriber (ARPS) levels.

Fixed broadband service revenue, on the other hand, will increase at a CAGR of 3.1% between 2020 and 2025, driven by continued rise in high average revenue per user (ARPU) fiber-to-the-home (FTTH) subscriptions. 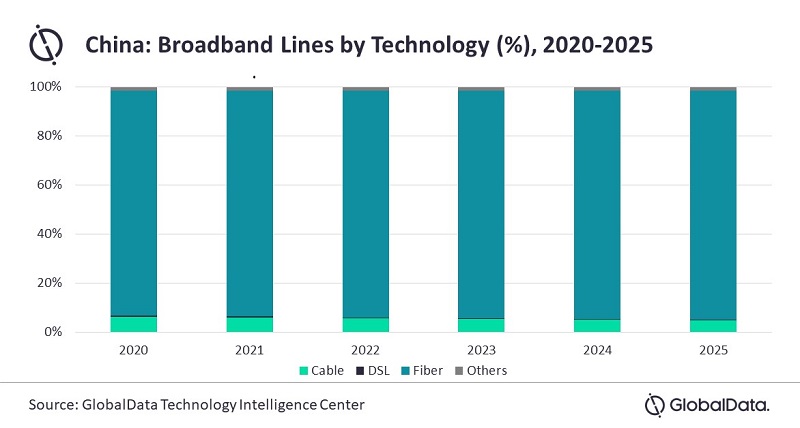 The Chinese telecom ministry is promoting private investment in state-controlled enterprises such as Broadband China and Internet Plus to boost fixed broadband penetration in the country, which will play a crucial role in the sector’s growth.

China Telecom will lead the fixed voice market through 2025, supported by its strong foothold in the circuit-switched segment and growing focus on the voice-over Internet Protocol (VoIP) services segment. China Mobile will lead the fixed-broadband segment, supported by its strong position in FTTH segment, where it accounted for an estimated 45.0% share of the total FTTH subscription in 2020.

Mr Iqbal concludes: “With the two largest players China Telecom and China Mobile holding majority of the subscription share in the fixed broadband market, there will be tough competition. It will be very interesting to see how these operators will attract subscribers with product offerings and services to further increase their market share in the future.”