The global air quality control systems (AQCS) market is expected to grow at a compound annual growth rate (CAGR) of 12.9% between 2019 and 2023 to reach $4.1bn in 2023, largely driven by the market in China. Although a global slowdown in capacity additions is expected, retrofitting existing assets and new capacity additions in emerging countries will continue to support the requirement for AQCS, according to GlobalData, a leading data and analytics company.

The company’s latest report, ‘Air Quality Control Systems for Thermal Power, Update 2019 – Global Market Size, Competitive Landscape and Key Country Analysis to 2023’, reveals that the market for AQCS is primarily driven by regulations established over environmental degradation concerns. A growth in demand for electricity and significant reliance on coal in developing economies of India, South Africa, Poland and Saudi Arabia, coupled with emission norms and regulations, will contribute to the AQCS market.

AQCS technology flue gas desulphurization (FGD) is estimated to grow at a CAGR of 17.8%, while fabric filters (FF) and selective catalytic reduction (SCR) will see 10.5% and 2.1% growth, respectively, over the forecast period. 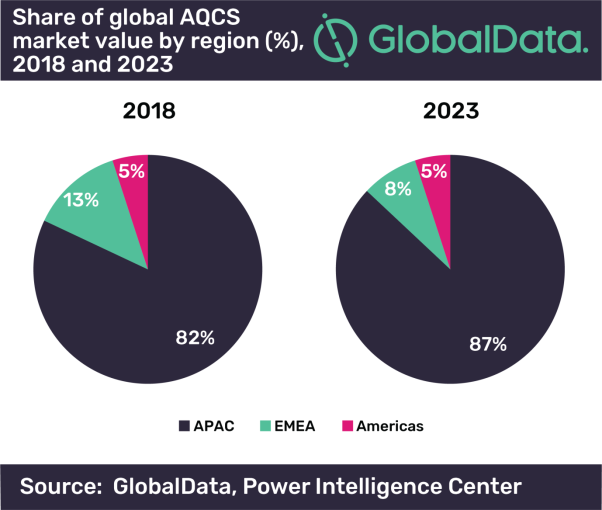 Despite the anticipated slowdown in coal-power generation for alternative technologies, coal will continue to dominate the fuel share for power generation, in particular in the Asia-Pacific (APAC) regions and Africa. In 2018, APAC was the largest market for AQCS, largely underpinned by China, which had a market value of $1.63bn.

Nirushan Rajasekaram, Power Analyst at GlobalData, comments: “With its rapidly expanding industrial base and growing per capita consumption of electricity, coal has been outlined by the Chinese government to play a prominent role in sustaining its domestic power demand. Concerns over air quality prompted the government to introduce stringent regulations, which contributed to the installation of emission control equipment. This is likely to continue influencing the market over the forecast period.”

Other countries within the region such as Taiwan, India and the Republic of Korea are expected to propel the AQCS market further, due to the introduction of measures aimed at restricting excessive emissions. In 2023, the market is estimated to be 87% of the global market value, increasing from 82% in 2018.”

By 2023, Europe, the Middle East and Africa (EMEA) are estimated to account for 8% of the global AQCS market. The strict norms for coal-fired power plants in the developed countries of Western Europe, coupled with an increase in coal-fired capacity in developing countries such as Poland, South Africa, and Saudi Arabia, will contribute to a steady demand for AQCS. The market in the Americas is largely driven by retrofits in the US and Chile, resulting in a comparatively small market value. Towards the end of the forecast period, SCR is expected to be widely deployed in the EMEA and the Americas, with low NOx burners being replaced, to adhere to the rigorous emission standards.

Rajasekaram concludes: “Growing concerns about climate change and carbon emissions have spurred governments worldwide to implement various measures to help curtail the amount of emissions and particulate matter released into the atmosphere. Technology has evolved to develop modern pollution control systems, which can greatly reduce the environmental footprint of thermal power plants, which are and will continue to remain an integral source of power for many countries.”