The GCRI determines the existing and future level of country risk, by assessing various qualitative and quantitative parameters. The index is formulated to help companies prepare their global business strategies and analyze risk parameters pertaining to the political, economic, social, technological, legal and environmental factors.

The latest GCRI results for Q4 2018, compared to Q2 2018, reveal a number of interesting insights into risk scores of various countries and regions. 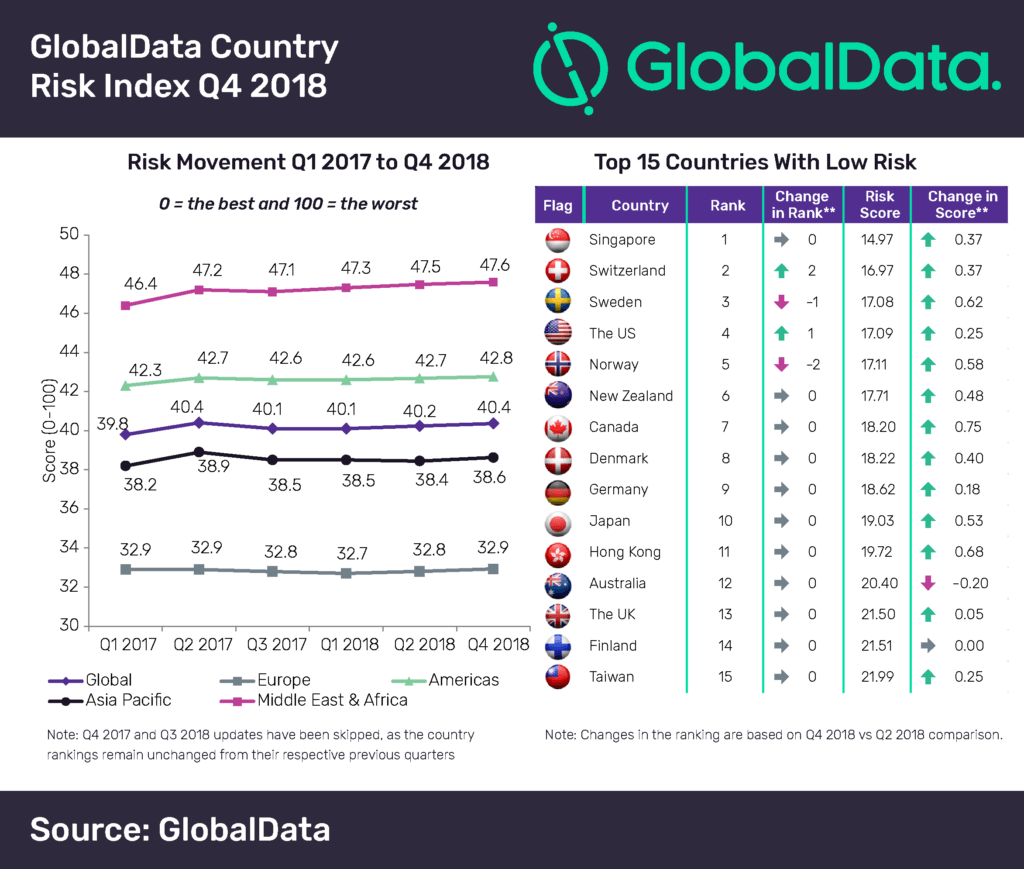 Despite witnessing an increase in the risk score (32.8 in Q2 2018 vs 32.9 in Q4 2018) on account of rise in the political risk caused by Brexit, trade tensions coupled with rise in nationalism, Europe has emerged as the lowest risk region during the quarter.

Kapil Sharma, Economic Research Analyst at GlobalData, said: “In many countries, there have been several instances of huge clashes between the government and the opposition due to the rise of the nationalist sentiments, which could lead to a loss of cohesion in the EU.”

As the deadline for Brexit deal nears, high uncertainty prevails which may lead to a no-deal Brexit.

Although the region posted strong economic growth in 2018, several downside risks remain due to rising geo-economic tensions around the globe. In Q4 2018, major Asian nations, including India (7.1%, October-December 2018), China (6.4%) and Singapore (2.2%), witnessed a deceleration in economic growth compared with the same period of the previous year. Although the US and China agreed for a 90-day truce to the bilateral trade negotiations, no progress has been made. The performance of key regional indices in Asia-Pacific was bearish due to the increased uncertainty in the global markets.

Americas – political and economic worries to continue in 2019

The risk score of the Americas also increased in Q4 2018 due to heightened political turmoil and economic uncertainties and its ripples are expected to continue in 2019. In the US, the Congress is facing political polarization over the economic and social policies, which led to the longest federal government shutdown of 35 days (from December 22, 2018 until January 25, 2019). Increasing political turmoil in Venezuela and Nicaragua along with continuing guerilla wars in countries such as Colombia and Ecuador have increased political risk.

The Middle East and Africa (MEA) region witnessed an increase in its risk score in Q4 2018; however, the fiscal consolidation and rising investments are supporting the recovery of oil exporters while policy reforms are benefitting the oil importers. The key geopolitical risks in the region include the re-imposed sanctions on Iran by the US, interstate proxy wars and terrorism in Syria, Yemen and Libya. In addition, liquidity risks in the countries such as Angola, Bahrain, Ghana, Kenya and Lebanon have intensified due to banking constraints.