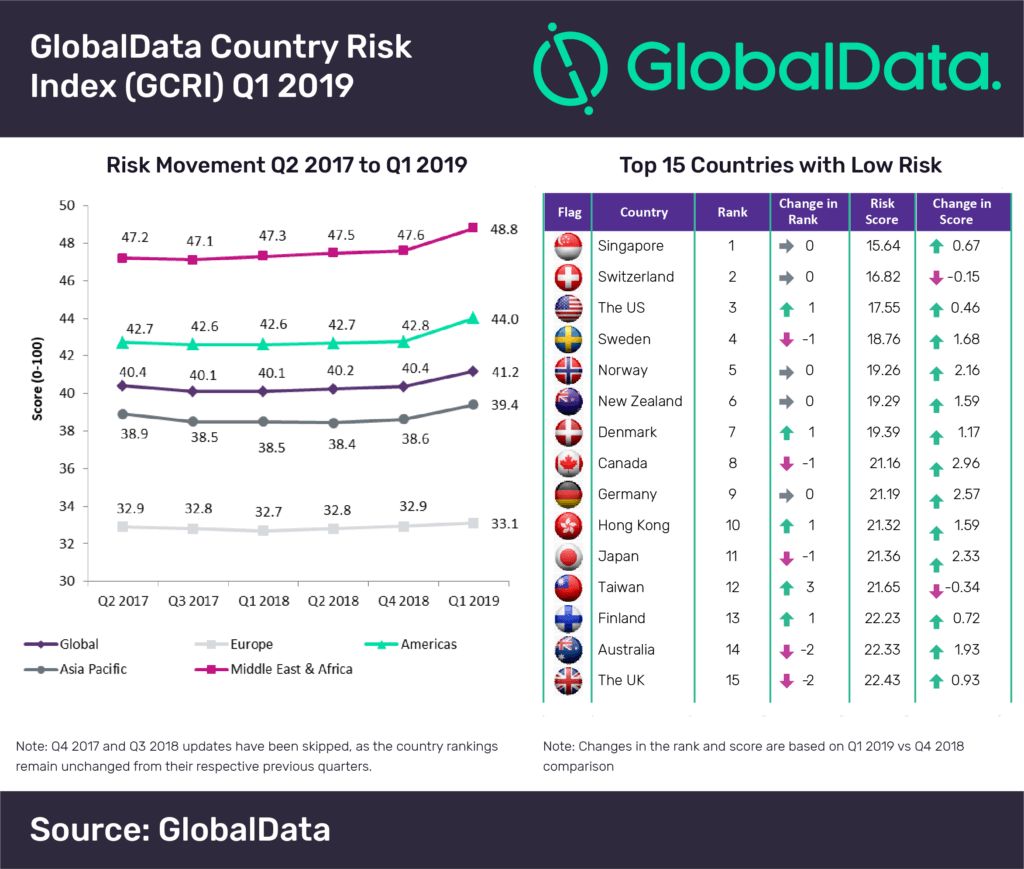 Europe – Brexit looms large
Europe remained the lowest risk region during Q1 2019. However, the region witnessed an increase in the risk score during the period on account of rising political risk due to uncertainties arising from Brexit, increasing trade tensions, deteriorating government finances and rise in nationalism. Amidst the prevailing uncertainties in the region, nations such as Switzerland, Sweden, Norway, Denmark, Germany, Finland and the UK continue to remain in the list of top 15 nations with the least risk in Q1 2019.

Jaison Davis, Senior Analyst for Economic Research at GlobalData, comments: “With Italy negating the European Union (EU) debt rules in 2018 and likely to do so in 2019 and 2020, the European Commission is forced to recommend disciplinary action against Italy. France and Belgium also have issues related to their finances. Many nations from the region also prefer lenient macroeconomic policies, on the back of nationalist sentiments.

Furthermore, the prevailing uncertainties related to Brexit indicate a no-deal Brexit in near future. These developments not only impact the growth prospects in the region in 2019, but also can lead to the loss of cohesion in the EU in the long-run.”

The risk score for the Asia-Pacific region has increased in Q1 2019 over the previous quarter due to the rising geopolitical and economic tensions, including a slowdown in Chinese economy, housing bubble fears in Australia, political uncertainties in Thailand, ongoing South China Sea conflicts and increasing unemployment in India. However, Singapore continues to remain as the lowest risk nation in Q1 2019 risk index update, irrespective of a slight increase in its risk index score. Expansion of protectionist policies by the US targeting nations such as China and India through measures of high tariffs and restrictive visa provisions will have a deeper and adverse growth impact not only in the region, but across the globe. Other nations from the region which continue to remain amongst the 15 least risk nations include New Zealand, Hong Kong, Japan, Taiwan and Australia.

The risk score of the Americas increased in Q1 2019 as compared to Q4 2018 due to heightened political turmoil and economic uncertainties across various American nations. In the US, the Congress remains highly polarized over the economic and social policies of President Trump. Political unrests in Venezuela and Nicaragua and poor economic recovery in Argentina and Brazil also contribute to the risk in the region. Irrespective of the intensifying uncertainties in the region, the US and Canada remain amongst the top 15 least risk nations in Q1 2019 risk index update.

The Middle East and Africa region witnessed an increase in its risk score in Q1 2019. Tightening global financial conditions are resulting in higher debt servicing costs for several countries in the region. Continuing blockade on Qatar, re-instated sanctions over Iran by the US, fluctuating oil prices and persisting civil wars across Syria and Libya emerge as major risk concerns for the region.