The global market for nuclear power steam generators is projected to grow marginally to reach $1.02bn in 2026, growing at a compound annual growth rate (CAGR) of 0.5% between 2019 and 2026, according to GlobalData, a leading data and analytics company. The market for steam generators will be dominated by new installations; however replacements will witness higher growth over the forecast period.

The company’s latest report: ‘Steam Generators for Nuclear Power, Update 2019’ reveals that the market for new installations is expected to hold steady, whereas replacements will witness significant growth. With countries shifting towards low carbon power generation and resource diversification, nuclear will remain vital to the power sector development for many countries across the world. However, the push towards nuclear power adoption is not uniform worldwide, with anti-nuclear sentiments defining the pathway for nuclear power development in certain key markets. 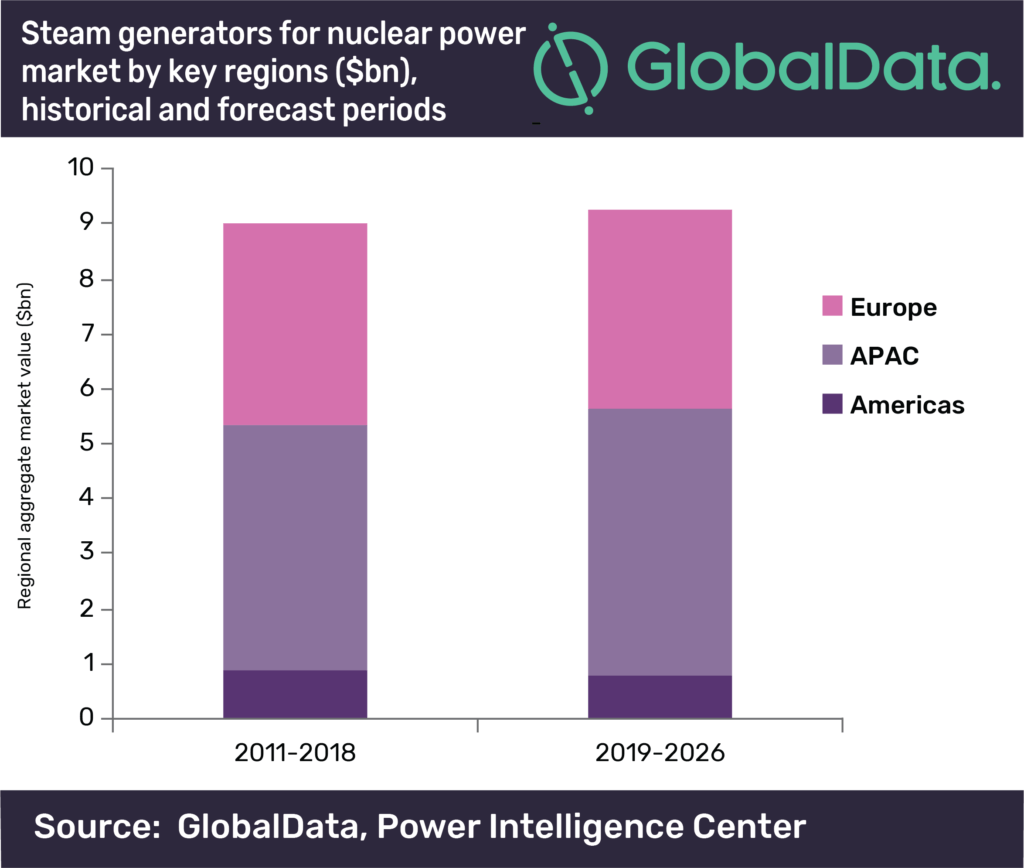 APAC is expected to dominate the market with $4.8bn by 2026. The inclusion of nuclear power in China and India will drive the new installations market, whereas Japan and Republic of Korea will see their markets slowdown. Other countries within APAC such as Vietnam, Bangladesh, and Uzbekistan have strong projections for nuclear, driving the regional market for steam generators. Although second to APAC, Europe is likely to be the fastest growing market, with the market value expected to grow at a CAGR of 11.4%, supported by Russia and the UK.

Nirushan Rajasekaram, Power Analyst for GlobalData commented: “Several factors such as increasing demand for electricity, especially in developing regions, low cost of power generation, high efficiency, and carbon emission concerns are prompting the utilization of nuclear power. Unlike renewable energy, nuclear provides low carbon electricity with a significantly high degree of reliability and is already supplying to power demand on a large scale.”

The Fukushima disaster in 2011 was the watershed moment for the nuclear power industry, following which anti-nuclear views grew and governments opted for measures that restricted nuclear power growth. Countries across the world such as Japan, Germany, France, and Republic of Korea proposed reducing the role of nuclear power. Operational safety took precedence contributing to a growth in the replacement markets of Americas and Europe. Moreover, the need to generate electricity from nuclear as securely and safely as possible will continue to drive the replacement market and support the development of nuclear power plants with the highest level of safety.

Rajasekaram adds: “Currently, the industry faces concerns regarding project funding, processing of nuclear waste, safety issues, aging of nuclear facilities, and lack of skilled workforce and social acceptability. However with the industry striving for the highest standards and commitment to safety, upcoming nuclear power plants could sway opinions in an overwhelming favour for increased nuclear power adoption globally.”