JPMorgan Chase has retained its top position as the most valuable bank in the list of ‘Global Top 25 Banking Institutions by Market Capitalization’ (M Cap) as of 31 December 2018, according to GlobalData, a leading data and analytics company.

GlobalData has used a number of key metrics including M Cap, revenue, price-earnings ratio (P/E), earnings per share (EPS), return on equity (RoE), return on assets (ROA), loan-to-deposit (LTD) ratio, non-interest income as a percentage of revenue (NII as % of revenue), and loan loss provision as a percentage of net loans (LLP as % of net loans) to assess the financial health of each company in the top 25 list. 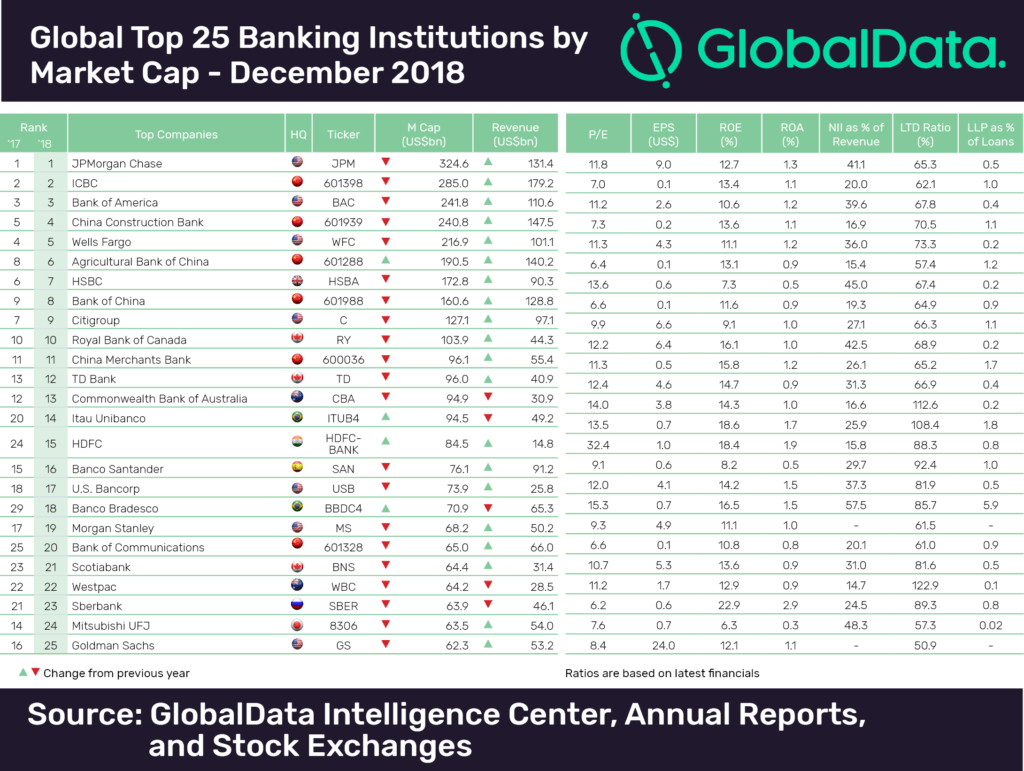 The aggregate year-on-year M Cap of the top 25 decreased by 15.4% from US$3,785.4bn to US$3,202.4bn. There were 21 players which registered decline in their M Cap. Citigroup, Mitsubishi UFJ, Morgan Stanley, Goldman Sachs and Wells Fargo were the major losers with a drop of over 25%. Among the gainers, HDFC Bank of India grew in double digits while moderate growth was witnessed for Agricultural Bank of China as well as Brazil’s Itau Unibanco, and Banco Bradesco.

Even though all the gainers belong to BRIC countries, it was not such a rosy picture for the BRIC banking sector as India continues to grapple with bad loan pile on its public sector banks’ balance sheets and Brazil’s banks look to find a way out from the country’s recession. Both ICBC and Bank of China declined in China and Russia’s Sberbank saw a drop in M Cap as well, highlighting the challenges prevailing in these countries.

Parth Vala, Financial Analyst at GlobalData, adds: “Despite interest rate hikes by the Fed, overall, it was an unpleasant year for banking sector, driven by all-time low spread between two-year and 10-year US treasury notes that led to flatter yield curves, which affected banks’ profitability; and escalating trade war.”

On the revenue front, there was an overall growth of 7.5%, with 20 players reporting positive growth. Among them, China Merchants Bank, TD Bank, Morgan Stanley and Goldman Sachs grew over 15% while others reported moderate growth. It will be interesting to see if this can hold up, given lower global growthforecast by the IMF. Five players that reported decline in revenue were Commonwealth Bank of Australia, Itau Unibanco, Banco Bradesco, Westpac and Sberbank. 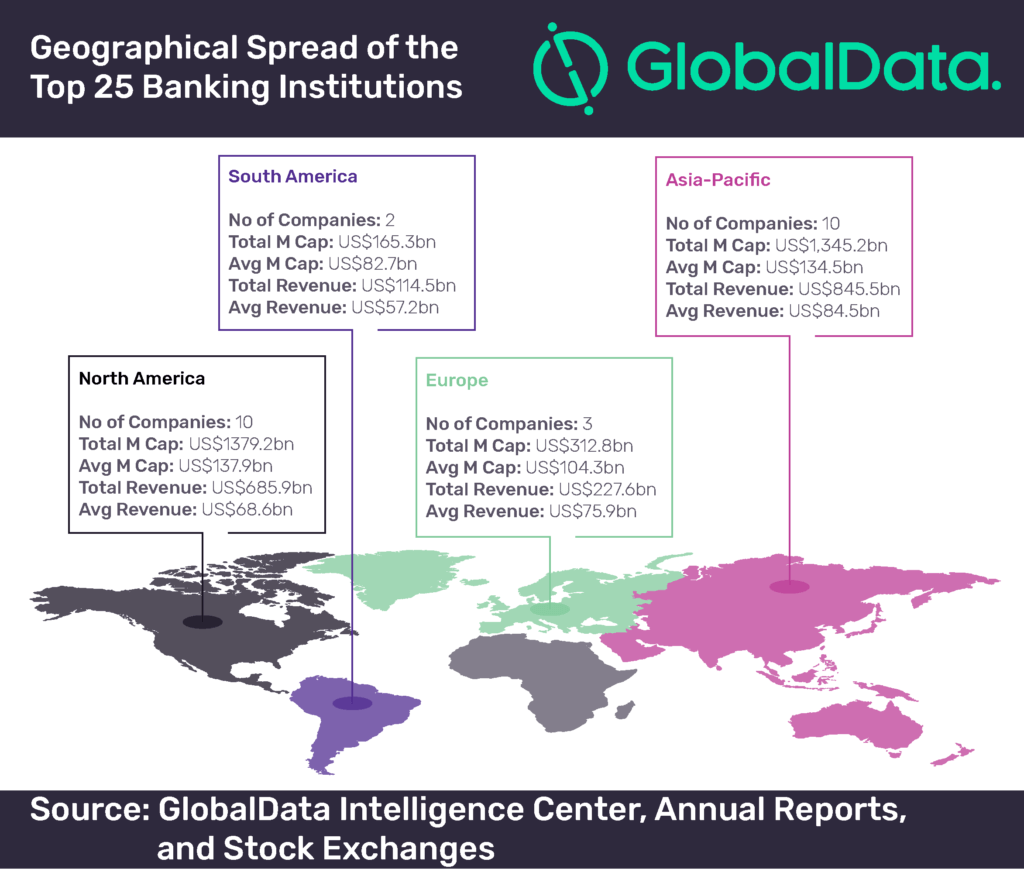 The top 25 continued to have adequate liquidity with an average LTD ratio of 75.6%. Five of them – HDFC, US Bancorp, Banco Bradesco, Scotiabank and Sberbank – reported the ratio within the ideal range of 80%-90% while Commonwealth Bank of Australia, Itau Unibanco and Westpac witnessed LTD ratio of over 100%, indicating a relatively greater dependence on wholesale funding.

The average of NII to revenue was 29.6% for the top 25. This measure for Bradesco was 57.5%, which indicates a greater focus on fee-related activities in light of low interest rate environment. The remaining players derived majority of revenue from interest related activities, with the ratio below 50%. The average LLP as percentage net loans stood at 0.9% with 13 players ranking better than the average, indicating high quality of assets.

The average P/E ratio for the top 25 was 11.1x, of which 12 players’ P/E was below average. JPMorgan Chase, Citigroup, Royal Bank of Canada, Scotiabank, and Goldman Sachs reported EPS of more than US$5. The average ROE and ROA of the top 25 were 13.2% and 1.1%, respectively, with highest being 22.9% and 2.9% of Sberbank, which has been reporting consistent improvement in its business performance and profitability for a past few years.