After almost five years wait and more than US$15bn spent, the Tokyo 2020 Olympics successfully concluded on 8 August 2021. The US topped all the three medal categories to get the first rank in the overall medal tally. Asian counterparts, China and the host country Japan, occupied the next two spots with Australia settling at sixth spot. Against this backdrop, GlobalData, a leading data and analytics company, tries to find the link between the economic power of countries and the number of medals won at the mega sporting event.

“For example, except for Russia and China, countries with higher GDP per capita such as the US, the UK, Japan and Australia featured in the top 10 medal winners list of the Tokyo 2020 Olympics. Although the GDP per capita of China and Russia is lower than other developed nations, the respective governments’ decision to spend more on preparing the athletes for the Olympics yielded fruitful results.”

Reportedly, sports organizations in the US received support from the federal government to the tune of US$12m in 2020. On the contrary, although India has huge potential in terms of its demographic dividend, the government decided to reduce the overall budget for sports by 8.2% 2021-22.

Ms Rao adds: “Lack of accessibility to sports training, poor infrastructural facilities for games such as hockey, football, athletics, absence of training centers and inadequate funding to sports centers at state level remain the major hurdles to sports in India.” 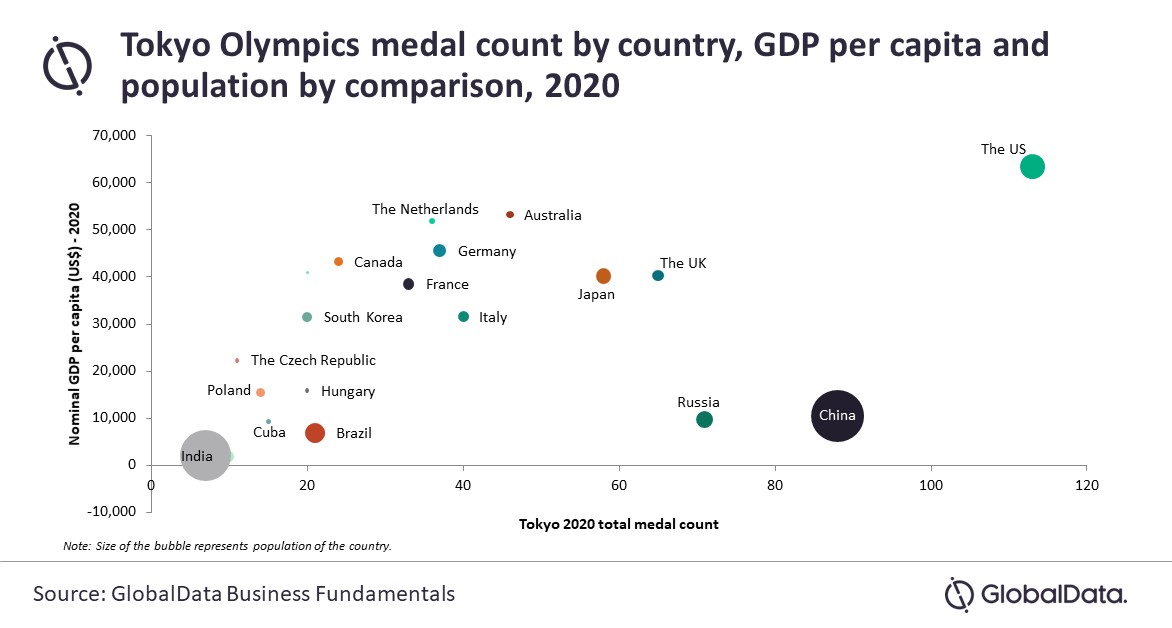 According to Indian Sports Minister’s statement in 2018, India spends only three paisa per athlete per day, whereas China spends 200 times more on the same. The result is reflected in the number of medals earned by India (seven) and China (88) at the Tokyo 2020 Olympics. China’s success reflects the government’s continued support to boost sports industry and train its athletes. In addition, the sports authorities of China have an ambitious plan to transform sports into a US$773bn industry by 2025.

Eurostat data for 2019 reveals that France spent US$237.5 per person on sports followed by US$252.7 in the Netherlands. While, on the other hand, Italy’s investment in sports and recreation is like that of the UK, at US$92.5 per head. In line with this, France, Germany, and Italy won medals and featured in the top 10 countries list.

Ms Rao concludes: “African countries and small APAC countries remained at the bottom of the Olympic medals list. The ongoing COVID-19 pandemic resulted in the diversion of funds from other sectors including sports to stimulus packages aimed at controlling the spread of the virus. Moreover, lack of opportunities, poor training institutes, improper government funding and lack of suitable infrastructure remain the main hurdles for major African and developing economies.”