GlobalData analyzed the year-on-year (YoY) change and compound annual growth rate (CAGR) of the publicly-traded global banks over the past five years in revenue (interest income + non-interest income), net profit and total assets, and ranked them based on their latest revenue. 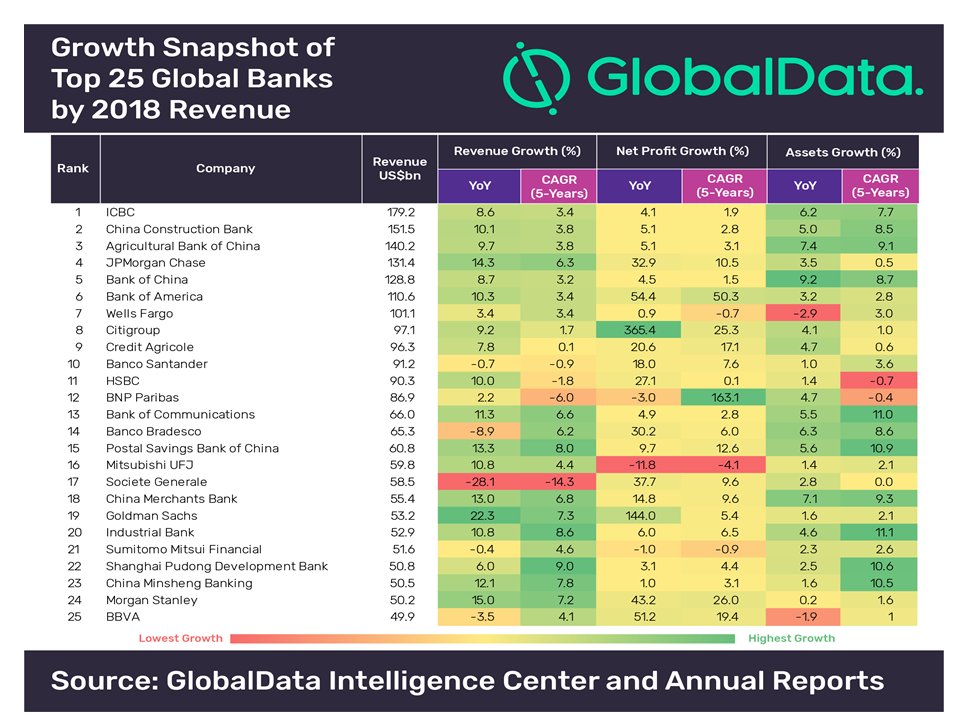 Among the banks, which reported YoY decline in revenue, Societe Generale was the major loser as there was a decline in its interest and similar income, and income from other activities.

Parth Vala, Company Profiles Analyst at GlobalData, comments: “On the profitability front, the top gainers, which reported over 50% growth were Citigroup, Bank of America, Goldman Sachs and BBVA. Citigroup was back to profitability after it incurred one-time impact of tax reform in the previous year. Bank of America and Goldman Sachs benefited from the tax reform, which significantly brought down their effective tax rates. Cost reduction initiatives, robust revenue stream and the sale of its Chilean franchise were the main drivers of profit growth for BBVA.”

Mitsubishi UFJ and Sumitomo Mitsui Financial were the only two banks from the top 25, which reported YoY decline and negative CAGR in their profits over the past five years.

Vala adds: “Large Japanese banks have been suffering from aging and shrinking population and prolonged ultra-low interest rate environment in the country. Mitsubishi UFJ’s profitability suffered on the account of lower net fees and commission income, and net trading and other operating profits; and increased general and administrative expenses. Sumitomo Mitsui Financial reported marginal decline of 1% due to contracted lending margin.”

Except Wells Fargo and BBVA, all the banks in the list reported moderate YoY increase in their total assets. In the recent past, Wells Fargo was found to be involved in sales malpractices. As a result, until the bank puts its house in order and resolves all internal governance issues, the Federal Reserve passed an order to cap its balance sheet at US$1.95 trillion. The bank expects to operate under the cap until the end of FY2019.

BBVA has been witnessing decline in its total assets for the past three years. During FY2018, its total assets reduced due to decline in assets of South American business owing to the sale of BBVA Chile, fall in assets in Turkey due to the adverse effects of about 25% depreciation of Turkish Lira against euro, and decrease in non-core real estate assets.

Telco banking offers build on brand identity and rides wave of digitalization, says GlobalData
TSB likely to fall behind competition in race to digitization
N26’s latest results show time is running out for the bank to fix itself
North America continued to dominate global VC funding landscape during Q4 2020
Monzo needs to focus on what is essential to avoid the same fate as Xinja