An analysis of GlobalData’s Cybersecurity Influencer Platform, which tracks more than 200 leading industry experts and their discussions pertaining to the emerging trends, pain areas, new fields of innovation and other popular areas on Twitter, has revealed Bob Carver, Principal – Cybersecurity Threat Intelligence and Analytics at Verizon, as the top cybersecurity influencer during the fourth quarter (Q4) of 2020. Carver largely shares updates on cybersecurity, IoT and risk management. 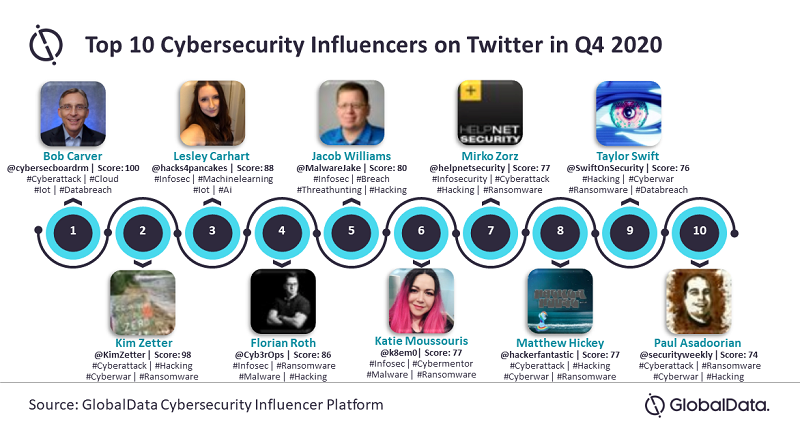 Information security, hacking and ransomware were the most mentioned trends among cybersecurity influencer discussions on Twitter during the period.

Smitarani Tripathy, Influencer Analyst at GlobalData, comments: “The discussions around information security were related to its significance, which has grown during the COVID-19 lockdown when most of us were working from home to curb the spread of the virus, and the strategy and tips shared by cybersecurity experts to protect sensitive information online.”

Hacking emerged as another top trend, led by the conversations around Windows 10 remote hacking threat, which was confirmed by the US Department of Homeland Security, Cybersecurity and Infrastructure Security Agency (CISA) in October.

Among companies, Alphabet Inc (Alphabet), Amazon.com (Amazon) and GitHub emerged as the most mentioned companies among cybersecurity influencer discussions on Twitter during Q4 2020.

The discussions related to Alphabet spiked when its subsidiary Google LLC made a public announcement that it was hit by 2.5 Tbps DDos (a type of cyberattack) in 2017. API flaws in Google’s Waze, identified by a researcher, could have allowed hackers to identify and track users.

Amazon emerged as another most mentioned company, led by surge in discussions when the company sacked multiple employees for leaking customer data to unaffiliated third party in October.