In the run up to the General Election, GlobalData Retail has conducted a survey to discover the voting intentions of shoppers by main supermarket used:

According to GlobalData’s supermarket election survey, the Conservatives may struggle to win a decisive majority in Parliament, but if seats were supermarkets they’d be on for a landslide. The Tories are the choice of more shoppers at all supermarkets except ASDA, Iceland and the Co-op where Labour still leads.

Labour has lost control of Morrisons, which was a red stronghold in 2017, possibly as a result of Morrisons’ strong presence in the north, where many former Labour supporters backed the Leave campaign in the EU referendum.

The discounters have historically been Labour; however, this all changed in the 2017 election with the Conservatives taking both Lidl and Aldi. Labour has been unable to win back either of them, with the Tories widening its lead in both of the German grocers. They continue to increase their appeal to middle England, by changing consumer perceptions of their brands and significant expansion of physical stores into more affluent areas that typically vote Conservative. 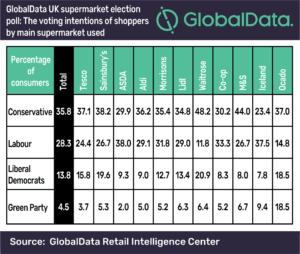 The good news for Labour is that it has extended its lead in ASDA and Iceland with the party now 8.1ppts and 14.1ppts ahead of the Conservatives respectively. The Lib Dems are in third place in nearly every supermarket except ASDA, where they are fourth and Waitrose where it beats Labour into second place. Perhaps Jo Swinson’s clear anti-Brexit message is working here, as Waitrose shoppers favoured Remain in the EU Referendum.

While environmental concerns are having an impact on supermarkets, especially in relation to the use of plastic packaging, the Green Party has made little impact on the shoppers of any of the Big Four. It is overrepresented in Iceland, though, where it has a 9.6% share, which shows that its messaging over palm oil and other sustainability issues has been successful in attracting shoppers that care deeply about such issues. Interestingly, the Green Party also does well at Ocado, where it has an 18.5% share of the vote, and indicates that many of its voters may deem online grocery delivery a more environmentally friendly option than travelling to stores.