Goldman Sachs and JP Morgan emerged as the top mergers and acquisitions (M&A) financial advisers for Q1-Q3 2021 by value and volume, respectively, according to GlobalData’s Financial Deals Database. Goldman Sachs advised on 369 deals worth US$917.2bn, the highest value among all the advisers. Meanwhile, JP Morgan led in volume terms having advised on 387 deals worth US$837.5bn.

Aurojyoti Bose, Lead Analyst at GlobalData, comments: “The competition for the top spot was close between Goldman Sachs and JP Morgan as they were the among the only three firms that managed to advise on more than 300 deals. While Goldman Sachs was the only firm to surpass the US$900bn mark, JP Morgan was not far behind. Interestingly, apart from leading by value, Goldman Sachs occupied the second position by volume. Similarly, JP Morgan apart from leading by volume also occupied the second position by value. 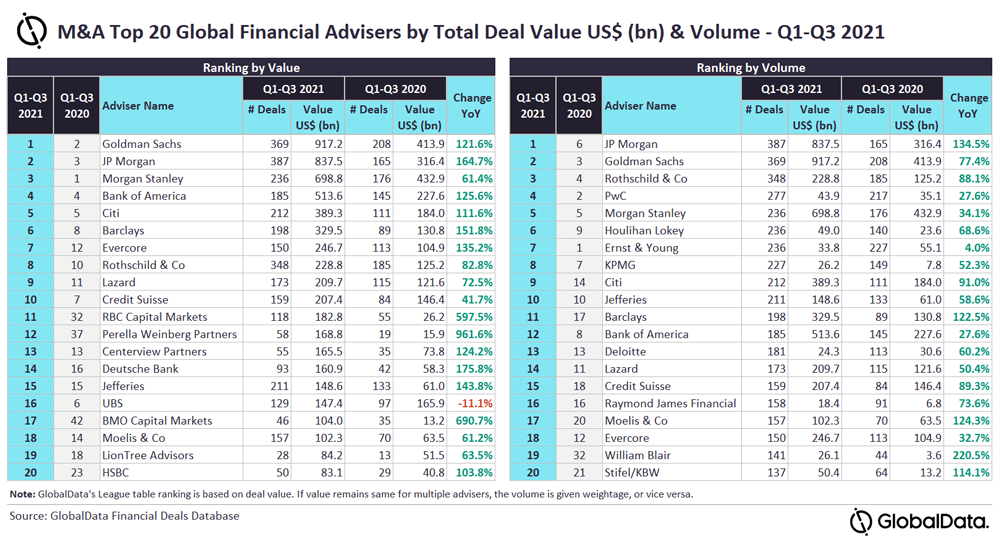 An analysis of GlobalData’s Financial Deals Database reveals that Morgan Stanley occupied the third position by value with 236 deals worth US$698.8bn, followed by Bank of America with 185 deals worth US$513.6bn and Citi with 212 deals worth US$389.3bn.