Goldman Sachs emerged as the top mergers and acquisitions (M&A) financial adviser in the retail sector by value as well as volume during Q1-Q3 2020. A total of 889 M&A deals were announced in the retail sector during the period, according to GlobalData, a leading data and analytics company.

Goldman Sachs achieved top position both in terms of value and volume having advised on eight deals worth US$21bn, the highest value among all the advisers.

Aurojyoti Bose, Lead Analyst at GlobalData, comments: “Deal activity remained subdued during the COVID-19 hit 2020 with none of the advisers including Goldman Sachs able to report double digit deal volume. However, it managed to advise on some of the big-ticket deals and was the only adviser to surpass US$20bn mark during these challenging times.

“Goldman Sachs advised on three billion-dollar deals (greater than or equal to US$1bn), out of which there was one megadeal (>US$10bn).”

JP Morgan occupied the second position by value with five deals worth US$15.6bn, followed by Barclays and HSBC with three deals each worth US$12.6bn and US$11.5bn, respectively. 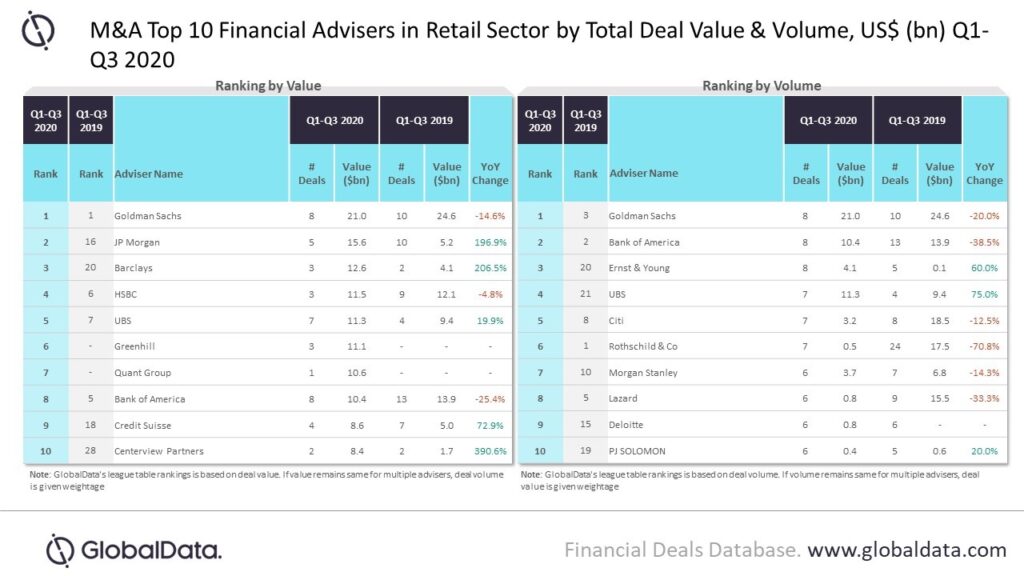 COVID-19 to drive e-commerce growth in Australia at 10.3% CAGR through 2024, forecasts GlobalData
Digital savvy companies stay relevant to customers in post-pandemic era, says GlobalData
Deal activity in Asia-Pacific likely to remain muted for some more time in 2021, says GlobalData
The boohoo group must give tired Arcadia brands attention for them to thrive
Surge of bio/pharma special purpose mergers and acquisitions should be viewed with skepticism, says GlobalData