Jio Platforms Limited (Jio), a subsidiary of India-based Reliance Industries Ltd. (Reliance), has recently added two tech giants Facebook and Google to its roster of high-profile investors. Subsequently, the mentions of ‘investment’ in Reliance’s filings (filed in Q3 2020, and earnings released on 30 July 2020) have grown multifold as compared to Q2 2020 (ended June 2020), according to GlobalData, a leading data and analytics company.

Rinaldo Pereira, Senior Analyst at GlobalData, says: “The fledgling tech company is not only weathering the COVID-19 storm but also thriving in it, as investments continue to pour in during the pandemic. Jio received around US$20bn investments, which helped it become debt free ahead of its March 2021 deadline. The windfall is expected to reflect on Reliance’s future performance as the company continues to tap into India’s e-commerce market, particularly in the grocery segment.”

Reliance’s retail sales dropped due to shuttered stores in Q2 2020 (fiscal Q1 2021). However, keyword mentions related to grocery and e-commerce rose for filings released in Q3 2020, as the company sees a massive opportunity in the market, despite established players like Amazon and Flipkart. Interestingly, Reliance Retail opened 69 new stores in the quarter. At the same time, Jio launched grocery delivery services across 200 cities in May 2020. 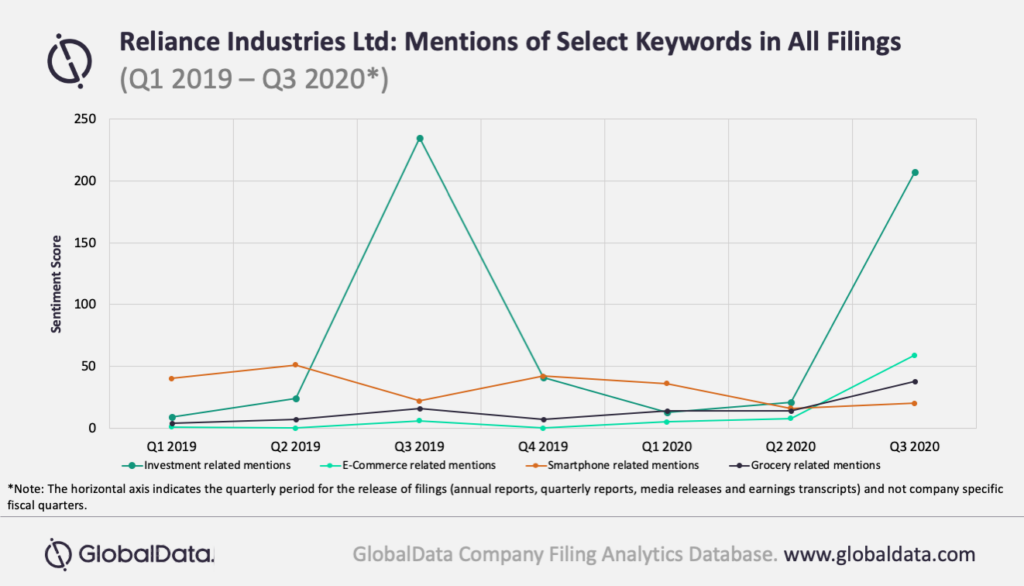 Pereira continues: “Jio’s new user growth slowed due to COVID-19. However, it witnessed a rise in profit and average revenue per user. That said, the company continued to draw in investment as it is nearing the half a billion subscriber mark.”

Another interesting trend identified by GlobalData’s Filing Analytics Tool was the rise in smartphone-related mentions in the company’s filings. Jio plans to launch a smartphone in partnership with Google for less than US$50.

Pereira concludes: “Jio is poised to compete with the big tech companies in India. Reliance expects to keep customers glued to handsets by offering a plethora of apps for videoconferencing, shopping, education, banking and OTT streaming. However, it remains to be seen if regulatory pressures prevent the company from growing into a monopoly.”

China will dominate APAC cloud computing market revenue over next five years, forecasts GlobalData
Storage revenue in India to reach US$4.5bn in 2024 due to COVID-19 pandemic, says GlobalData
Waitrose quickly shedding unprofitable stores to raise the stakes online
Next proves its resilience as it increases sales and profit guidance
John Lewis & Partners shows willingness to adapt but bonus wiped out by COVID-19